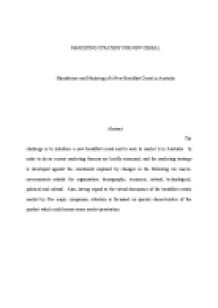 Manufacture and Marketing of a New Breakfast Cereal in Australia

﻿MARKETING STRATEGY FOR NEW CEREAL Manufacture and Marketing of a New Breakfast Cereal in Australia Abstract The challenge is to introduce a new breakfast cereal and to seek to market it in Australia. In order to do so current marketing theories are briefly examined, and the marketing strategy is developed against the constraints imposed by changes in the following six macro-environments outside the organisation: demographic, economic, natural, technological, political and cultural. Also, having regard to the virtual dominance of the breakfast cereals market by five major companies, attention is focussed on special characteristics of the product which could ensure some market penetration. Manufacture and Marketing of a New Breakfast Cereal in Australia Introduction The product is a new breakfast cereal called ?GoodHealth?, and it differs from those already on the market in two important respects: its ability to remain crisp for longer when milk is added, and its lower salt content (Oakenfull, 2009). The product will be manufactured to complement the existing range of food products already produced by ?PolyFoods?, a small company founded in 2001 and located in the outskirts of Canberra. The first intention is to market GoodHealth throughout Australia, and then to expand into the global marketplace. In order to achieve this aim attention will be given to exploiting modern marketing theories as they apply to the appropriate macro-environment outside the organisation. The application of marketing theory The aim of marketing is to sell the product and over the years a number of theories have been developed to identify the factors which are necessary for the construction and implementation of an effective marketing strategy. ...read more.

A less desirable solution for a new product could be to ally the company with one of the majors in producing an attractive subsidiary product. Natural The growing insistence of the ?Green Lobby? for all sectors of industry to make their products ?environmentally friendly? is introducing new constraints, in many cases, backed by governments. Whilst most people and organisations have a vague idea of what is involved, it should go beyond waste management and the elimination of unnecessary packaging. Leonidou (2006) of the University of Leeds has carried out a formidable literature survey and, as a result, proposed ?A Political Economy model of enviro-marketing strategies?. This, it is hoped, will elucidate the profile of a number of enterprises including ?the mediating role of the firm?s environmental orientation, as well as the elements of environmentally-based marketing mix? [and] the consequences of implementing strategy on the firm?s marketing performance? (Leonidou, 2006). There are elements in such an approach which could be of value in the breakfast cereal market, which could be coupled with greater use of the internet and TV so as to indicate that the product uses green resources to promote its marketing. It would also be sensible to consider highlighting the advantages of recycling the packaging. Another solution would be to use ideas from the coffee producers. They offer basic rigid containers ? glass or plastic ? with refill packages offered at a considerably lower price. ...read more.

An increasing number now use the internet, not only for shopping, but also for research on the benefits of different foods. The Australian Government is also engaging in and industry support and promotion programme to extol the benefits of increased consumption of cereals (CSIRO,2005). This translates to emphasis on health, truthful advertising on packets, the press, internet and TV, sponsorship deals with promotion of athletic events. Although there are cultural differences across Australia, they are generally not thought to be so severe as to require market segmentation and, initially at least, a standard product will suffice. Conclusion The manufacture and launch of a new breakfast cereal have been discussed in the light of modern marketing theories, and a number of unique and attractive selling points were identified. The strategies required were next considered in the light of the following macro-environmental factors: demographic, economic, natural, technological, political and cultural. While each one imposes its own particular constraints, some overlap, and the same marketing strategies will apply in the main, but with small modifications. In the case of the political constraints to marketing strategies, the outcome is more uncertain and some of the decisions have to be made in the light of changing governmental priorities. The general conclusion is that emphasis should continually be made on the good ? and often unique - points of the product. Where possible too advantage should be taken to promote not only the advantages of the product but also in the philosophical and helpful attitude of the company, particularly towards events and situations which are close to the heart of most Australians: health, poverty sport and national pride. ...read more.