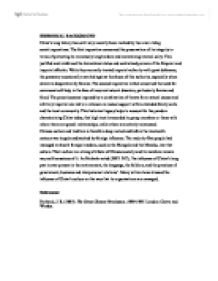 Many writers have stressed theinfluence of China's culture on the way that its organizations are managed .

HISTORICAL BACKGROUND China's long history has until very recently been marked by two over-riding social imperatives. The first imperative concerned the preservation of its integrity in terms of protecting its immensely long borders and maintaining internal unity. This justified and reinforced the hierarchical status and centralized powers of the Emperor and imperial officials. While they normally treated imperial authority with great deference, the peasantry occasionally revolted against the abuse of this authority, especially when driven to desperation by famine. The second imperative in fact concerned the need for communal self-help in the face of recurrent natural disasters, particularly famine and flood. The precariousness imposed by a combination of threats from natural causes and arbitrary imperial rule led to a reliance on mutual support within extended family units and the local community. ...read more.

K. (1987). The Great Chinese Revolution, 1800-1985. London: Chatto and Windus. ECONOMIC BACKGROUND The PRC has been one of the fastest growing economies in the world in recent times. China's achievement has been a dazzling success and quite unanticipated in many respects, particularly after the debacle of the Great Leap Forward and the woes of the Cultural Revolution under Mao Zedong. Since Deng Xiaoping initiated the 'Open Door' reforms in 1978 however, it has expanded by leaps and bounds. By the start of the new Millennium, China was hailed as a coming economic superpower. Living standards have risen greatly but the distribution of benefits has been uneven. By 2000, nominal GDP growth was around over eight per cent per annum. Industrial production grew even faster than this. ...read more.

The employed represented 56.1 per cent of the total number of Chinese people working. Women comprised 46.5 per cent of total employment, which is on the high side by international standards, though one should bear in mind that the Chinese Population Census of 2000 suggested that there were 117 females for every 100 males in the PRC. The PRC has to date avoided the worst of the late-1990s Asian economic crisis, but it may not be wholly invulnerable vis-�-vis the possible next one (The Economist 2002b). GDP growth is still buoyant, but bad debts continue to an albatross around the neck of the financial system. Asian devaluations risk undercutting its strong exports. In addition, the downturn in the US economy in 2002 augurs poorly for future export expansion. Recent US tariffs against imported low cost steel from the PRC and elsewhere may signal stormy times ahead (The Economist 2002a). No doubt, there are further threats (as well as opportunities) just around the corner. ...read more.