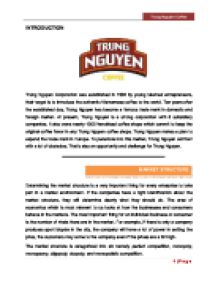 INTRODUCTION Trung Nguyen Corporation was established in 1996 by young talented entrepreneurs, their target is to introduce the authentic Vietnamese coffee to the world. Ten years after the established day, Trung Nguyen has become a famous trade mark in domestic and foreign market. At present, Trung Nguyen is a strong corporation with 6 subsidiary companies. It also owns nearly 1000 franchised coffee shops which commit to keep the original coffee flavor in any Trung Nguyen coffee shops. Trung Nguyen makes a plan to expand the trade mark in Europe. To penetrate into this market, Trung Nguyen confront with a lot of obstacles. That's also an opportunity and challenge for Trung Nguyen. Determining the market structure is a very important thing for every enterprise to take part in a market environment. If the companies have a right identification about the market structure, they will determine clearly what they should do. The area of economics which is most relevant to us looks at how the businesses and consumers behave in the markets. The most important thing for an individual business or consumer is the number of rivals there are in the market. For example, if there is only a company produces sport bicycle in the city, the company will have a lot of power in setting the price, the customers may come to the company even if the prices are a bit high. The market structure is categorized into six namely perfect competition, monopoly, monopsony, oligopoly, duopoly, and monopolistic competition. In this part, we only concern about four markets including perfect competition, monopoly, monopsony, and oligopoly in order to bring out the deviation from the model of perfect competition that Trung Nguyen engages in. * Perfect competition There are so many sellers and buyers in this market and other condition are such, that no one can influence the price, all other things being equal. The eligibility for a perfect competition includes: a) ...read more.

fairer competition environment for domestic industries ( Supporting domestic industries to prevent and combat against foreign anti-dumping, anti-subsidy and safeguard cases ( (Source: http://www.qlct.gov.vn/Web/Default.aspx?lang=en-US) * The most criteria of the VCA is to create and maintain a fair competition environment with fair business opportunities for all market participants. The organization encourages and promotes the competition between enterprises and in so doing ensure the legitimate rights and interests of consumers, the development of technology and social advances. For Trung Nguyen Coffee, VCA helps company to have a sustainable development and fair competition with its competitors, especially big rivals such as Nescafe, Vinacafe and a chain of Highland coffee shop in big cities. Trung Nguyen shall feel secure when doing business in Vietnam. * VCA is responsible for investigating cases concerning practices of reduction, distortion or prevention of the competition in the market, which mainly are cartel, abuse of market dominance and anti-competitive economic concentration. After the completion of investigation, the department will refer the investigating reports and its proposal to the Competition Council or other competent authorities for decision. When Trung Nguyen is influenced by an unfair competition, VCA will organize an investigation to protect the company's right. * Preventing and terminating unfair competition activities such as deceptive and misleading indications, violating the others' business secret, emigrating or disturbing other competitor's business, advertising and promoting for unfair competition purposes, illegal multilevel sale, etc...to protect enterprises and consumers' rights. The department has authority to apply competent sanctions to deal with unfair competition cases. * The VCA combines with the Ministry of Industry and Trade in state administration over consumer protection issues. To complete this responsibility, VCA has been cooperating with other authorities and consumer protection organizations in Vietnam for ensuring the legitimate rights as well as interests of consumers to be respected by manufacturers and suppliers of goods and/or services. In case of violating the right of the customers/consumers, Trung Nguyen Coffee or other coffee enterprises are responsible for their performances equally. ...read more.

Britain's flexible labor market would enhance our performance within the Euro Zone: Britain's flexible labor market would be highly effective inside a single currency area and would help to attract even more inward investment from outside the EU. Higher wages and employment for UK workers: EMU could have long-term benefits for households, including potentially lower prices and higher wages - although the potential benefits here do depend greatly on the degree of sustainable convergence between the UK and other Euro Zone countries Political and economic influence: Britain stands to lose political and economic influence in shaping future economic integration if it remains outside the monetary system. AGAINST Loss of domestic monetary policy freedom: Joining a single currency reduces Britain's monetary policy autonomy. Britain might wish to retain the flexibility to set short term interest rates to meet her own internal macroeconomic objectives. Entry to the Euro Zone means a permanent transfer of domestic monetary sovereignty to the ECB. Constraints of the fiscal stability pact: Countries joining the Euro signed up initially to the fiscal stability pact which limited the scale of government borrowing to 3% of national income. Several nations have already broken the conditions of the pact and it has now effectively been abandoned. But remaining outside the Euro Zone gives the UK a degree of fiscal policy freedom not available to member states. Foreign investment issue: Opponents of Euro membership argue that Britain can continue to attract capital inflows outside of the Euro Zone. Favorable supply-side factors in both product and labor markets make the UK attractive for foreign investment. Adjustment costs: The change over process to the introduction of the Euro will involve substantial menu costs for businesses and banks. These menu costs will bear heavily on small-medium sized enterprises. (Source: http://tutor2u.net/economics/revision-notes/a2-macro-european-monetary-union.html) CONCLUSION Trung Nguyen Coffee Corporation has achieved a lot of success in domestic and foreign market. The company has been introducing the authentic of Vietnamese coffee to the world. However, the economic world fluctuates day by day that directly affect the coffee prices and purchasing power of the customers. ...read more.