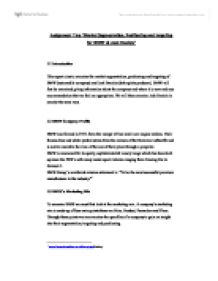 Assignment Two 'Market Segmentation, Positioning and targeting for BMW & Jack Daniels' 1.1 Introduction This report aims to examine the market segmentation, positioning and targeting of BMW (automobile company) and Jack Daniels (dark spirits producer). BMW will first be examined giving information about the company and where it is now and any recommendation that we feel are appropriate. We will then examine Jack Daniels in exactly the same way. 1.2 BMW Company Profile BMW was formed in 1917, from the merger of two small aero engine makers. Their famous blue and white symbol stems from the colours of the Bavarian Luftwaffe and is said to resemble the view of the one of their plane through a propeller. BMW is renowned for its sporty, sophisticated & luxury image which has been built up since the 1970's with many motor sport victories ranging from Touring Car to Formula 1. BMW Group's worldwide mission statement is: "To be the most successful premium manufacturer in the industry."1 1.3 BMW's Marketing Mix To examine BMW we must first look at the marketing mix. A company's marketing mix is made up of four main points these are Price, Product, Promotion and Place. Through these points we can examine the specifics of a company to gain an insight into their segmentation, targeting and positioning. 1.4 Product The products produced by BMW are prestigious, high performance, technologically advanced automobiles. These start from mid-range cars up to the most prestigious and luxurious. The present models are: BMW 3 Series - Saloon, Coupe, Convertible, Touring, Compact BMW 5 Series - Saloon, Touring BMW 7 Series - Saloon BMW Z3 - Roadster BMW Z4 - ...read more.

E.g. Range Rover and the BMW X5(4X4).8 2.2 Conclusion BMW strategies seem to be correct due to continued and growing market share, high profitability, and increasing brand strength. The recommendations that may be made to BMW are that they should be careful not to over stretch themselves into many other markets as their brand image may become too diluted. This would mean that they may go through a down turn in sales in future years as the brand becomes less prestigious. History shows that this has happened to major producers before with the likes of Rover group in the late seventies and early eighties when they were partly nationalised and controlled the whole UK motor industry. The truth to be told is that BMW is German and thus is more likely to be better organised than the British dinosaur in the late seventies and eighties. Jack Daniels 2.3 Jack Daniels Company Profile At the moment the Jack Daniels Company is owned by Brown Forman Corporation which is one of the largest American spirits and wine retailers. Due to its total sales in 2001 being more than 2.1 billion dollars. The first distillery of Jack Daniel's was opened in 1886 in Tennessee (USA). In the last century J.D has been exported in more than one hundred and twenty countries, making J.D' s logo one of the most known brands in the world. The logo can be found on t-shirts, key rings or posters in every remote corner of the world. J.D factory has always maintained its traditional image with the same original characteristics since it was purchased by Jack Daniels at 13 years old.9 2.4 J ...read more.

In the last four or five years the environment Market of mixed spirit is changing in forms of habits and uses. By the time that competitors such as Bacardi, Smirnoff and Martini launched a new range of pre-mixed bottled spirits with a law dosage of alcohol, for example Bacardi Breezer, Smirnoff Ice Martini Metz with the final goal to target late users of alcohol that usually are beer drinkers (female drinkers or younger drinkers). A new trend since these products is invading the segment of usually mixed spirit drinkers (e.g. those who are used to drinking spirits mixed with soft drinks). This is also facilitated by the fact that a pre-mixed bottle is more assessable for the consumers rather than a fresh cocktail by a retail point of view. In fact it is possible to buy a single bottled drink in a grocery shop which it is not really a single J.D with Coke. These are the factors that are making Jack Daniel products weaker on the market and forced the organisation to plan a production of pre-mixed bottles of Jack Daniels and Coca Cola with a low percentage of alcohol, but always maintaining its traditional image with a black bottle and the same original logo (J.D DARK COLA)13. The intention of the Jack Daniels organisation is to aim for a younger male target market of alcoholic drinkers and to remain as strong as they are in the segment of older drinkers who prefer to drink Jack Daniels straight.14 1 www.bmweducation.co.uk/companyhistory 2 www.bmw.co.uk/models 3 www.bmw.co.uk/prices 4 www.bmweducation.co.uk/companyfacts/fact13.shtm 5 www.bmweducation.co.uk/statistics 6 see fig1 7 see fig2 8 www.bmweduction.co.uk/companyfacts/competitors/fact1.shtm 9 www.brown-forman.com 10 www.drinkingadgets.com/jackdaniels.php 11 www.kpe.com/ourwork.howpoints/veiwpoint.advergaming4.shtml 12 www.ftc.gov/reports/alcohol/alcoholreport.htm 13 www.packagingdigest.com/news/0702news.htlm 14 www.brown-forman.com/brand_news/030702millerandJD.html ...read more.