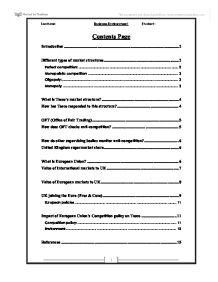 Contents Page Introduction 2 Different types of market structures 2 Perfect competition: 2 Monopolistic competition: 3 Oligopoly: 3 Monopoly: 3 What is Tesco's market structure? 4 How has Tesco responded to this structure? 4 OFT (Office of Fair Trading) 5 How does OFT checks anti-competition? 5 How do other supervising bodies monitor anti-competition? 6 United Kingdom supermarket share 6 What is European Union? 6 Value of International markets to UK 7 Value of European markets to UK 8 UK joining the Euro (Pros & Cons) 9 European policies 11 Impact of European Union's Competition policy on Tesco 11 Competition policy: 11 Environment: 12 References 15 Organisation behaviour, Market environment and international dimensions Introduction This task for Business environment is split in two parts. For Part 1 I will be describing the 4 different market structures that economist usually talk about are perfect competition, monopolistic competition, oligopoly and monopoly. Using the 4 market structures I will illustrate using real life case studies and examples how a selected business of my choice has behaved/responded to its market structure and finally describe how the OFT and other regulatory bodies check against anti - competitive behaviours. In the second part of the assignment I will describe the value of international and EU markets to UK firms. My description will include an evaluation of the pros and cons of UK joining the Euro along with that I will describe the impact of 2 EU policies on UK businesses. The business that I have chosen for this assignment is Tesco; this is because Tesco is a multibillion pound international business. Different types of market structures Market structures are the business orientated characteristics of a market; all businesses must focus on these characteristics of the market because these have an effect on the degree of competition in the industry and influence the business product or service pricing decisions. Perfect competition: In a perfect competition there are few entry and exit barriers, in this type of competition the companies target the mass audience and they differentiate their product with minor changes in the product attributes (Homogenous). ...read more.

Emissions trading European Union's rewards businesses and organisations, which reduce their CO2 emissions and penalises those that exceed limits. Introduced in 2005, the scheme takes in about 12,000 factories and plants responsible for about half the EU's emissions of CO2. Under the system, European Union governments set limits on the amount of carbon dioxide emitted by energy-intensive industries and if they want to emit more CO2 than their quota, they have to buy spare permits but most supermarkets stores do not manufacture and this means that they will have to use eco friendly methods of business and equipment. Tesco has already proven that they are committed towards being eco-friendly, "Tesco Plc, the world's No.4 retailer, plans to spend over 100 million pounds with British green technology companies over the coming year as it steps up its drive to halve carbon emissions by 2020." (http://uk.reuters.com/article/idUKTRE61203720100203) Environmental health Noise, swimming water, rare species and emergency response -these are just some of the areas covered under the extensive body of environmental legislation that the EU has established over the decades. EU has set binding limits on emissions of fine particles known as PM2.5. Released by cars and trucks, these microscopic particles can cause respiratory diseases. Under the new law, EU countries will have to reduce exposure to fine particles in urban areas by an average 20% by 2020. In 2007 Tesco received the Top online green award for their zero-emission delivery vans. Sustainable development Sustainable development has long been one of the overarching objectives of EU policy. EU leaders launched the first EU sustainable development strategy in 2001 and updated it in 2006 to tackle shortcomings and take account of new challenges. Since then there have been significant efforts in terms of policy. Now the focus is on putting policy into practice in to UK's market. As Tesco manly sells general groceries they are affected by the European Union's environment policy, in a way that it has to source materials from the suppliers who obey and follow the European Union's environment policy, this means that Tesco has limited span of potential suppliers. ...read more.