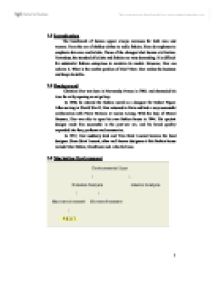 1.0 Introduction The benchmark of human appeal always increases for both man and woman. From the era of shabby clothes to noble fashion, from de-emphases to emphasis skin care and toilette. Those of the changes label human civilization. Nowadays, the standard of toilette and fashion are very demanding. It is difficult for substantial fashion enterprises to maintain its market. However, Dior can achieve it. What is the market position of Dior? How Dior makes the business and keeps its stable. 2.0 Background Christian Dior was born in Normandy, France in 1905, and channeled his love for art by opening an art gallery. In 1938, he entered the fashion world as a designer for Robert Piquet. After serving in World War II, Dior returned to Paris and had a very successful collaboration with Pierre Balmain at Lucien Lelong. With the help of Marcel Boussac, Dior was able to open his own fashion house in 1946. His opulent designs made him successful in the post-war era, and his brand quickly expanded into furs, perfumes and accessories. In 1957, Dior suddenly died and Yves Saint Laurent became the head designer. Since Saint Laurent, other well-known designers at this fashion house include Marc Bohan, Gianfranco and. John Galliano. 3.0 Marketing Environment 3.1 Marco Environment * Political Factor Dior is a French brand, which is very elegant. French possess one complete legal and tax system. ...read more.

It must increase Dior reputation and market shares. PARDA x LG smart phone * Establish new product line for other style The fashion style of Dior only fits some particular targets. The market shares will be narrow, since some of the fashion brands will snatch a part of market shares. Then, Dior should create another style and build specific product line. For example, leisure wearing and formal dressing. In order to ensure market position, Dior must seriously consider. 4.4 Threat * Competitors Although Dior is one of the cosmopolitan brands, there are semiprecious level competitors to challenge Dior current position, such as L.V, Gucci, and Burberry. They also possess reputation and profitability. Those brands products can directly affect Dior turnover sales, so Dior must draw attention with those brands. * Global economic trend In 2006, strong consumption pushed up American economy. It indirectly pushes up global economy. Dior turnover sales obviously increase. However, since March 2007, the risk of American second mortgage has started up until now. The global economy burden a risk consumers purchasing power decrease remarkably. It seriously affects Dior because it is a luxury products producer. In attempt to obviate economic crisis, Dior must adjust the selling strategy and cost control. * Designer stay or resign Designers are the important assets of Fashion Company. It is not easy to find or train potential designer because top designer stay behind another brand, even though there is a contract to restrict them. ...read more.

Second, product's quality, warranty, image are crucial. Then reputation value, Dior can consider to decrease price, which can probably increase market shares. * Promotion In fact, Dior does not have too much promotion. It just promotes the product through newspapers, website and some specific magazines, since a vast of people already know Dior. If Dior can remain more budgets for promotion. The reputation of Dior must rise. Dior can consider which type of advertising is the most effective for them. It is acceptable to adopt T.V, Huge advertising board. * Place In HK, Dior shops are located in famous shopping mall and popular place such as Habour City. It is not only conformable, but also convenient for consumers. In order to take the advantage of concentration, Dior should establish more shops in famous area. 7.0 Recommendation From my point of view, I suggest Dior keep noble image and put more resources into promotion such as sponsor famous football team, green campaigns, so Dior can establish a health and active image. On the other hand, Dior should search another source of consumers in order to increase market share. Because of luxury clients source are too narrow. It is necessary for Dior finding another segment. 8.0 Summary Dior is a successful brand in the world. They possess competitive advantage such as financial, History. Moreover, market segment were clearly separated by Dior, so they can concentrate in this segment by some marketing technique such as 4ps, consumer behavior. Good marketing strategy bring Dior to successful. Word court 2276 words ?? ?? ?? ?? 1 ...read more.