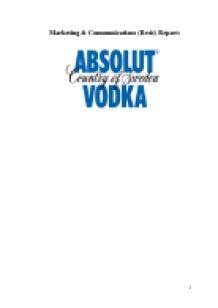 ï»¿Marketing & Communications (Resit) Report: ________________ Table of Contents ‘Absolut’ Introduction ‘Absolut’ Marketing Mix Analysis The ‘Absolut’ product ‘Absolut’ Pricing ‘Absolut’ Distribution ‘Absolut’ Promotion Recommendations & Conclusions References Synopsis This report is a brief endeavour to analyse the success of ‘Absolut Vodka’, a leader in the spirits market over a century beginning with its production in 1879. The critical success attributes of Absolut have been analysed with focus on its promotional ingenious within its marketing mix elements. ‘Absolut’ Introduction Absolut Vodka was introduced to the world of spirits in 1879 and today enjoys the status of being the third largest alcohol brand in the world competing with the likes of Bacardi and Smirnoff (AbsolutVodka, 2012). Currently, Absolut Vodka is produced and distributed by the V&S group which was acquired in 2008 by Pernod Recard, a French beverages producer. Currently, Absolut Vodka is distributed and sold in almost 126 nations the world over. Absolut Vodka is distilled in Åhus distilleries in accordance with the Swedish tradition reputed to be four hundred years old (AbsolutVodka, 2012). Today, Absolut enjoys the reputation of being the most popular imported vodka in the United States having been introduced in 1979 in the US market. ...read more.

In addition, (Lewis, 1996) observed that by pricing higher than its competitors, Absolut had attracted the wealthy customers. Following Absolut?s pricing strategy; Grey Goose placed its pricing higher than Absolut thus becoming a tough competitor (Lewis, 1996). However, Absolut began producing another variety of vodka of higher quality with advanced distillation such as continuous coupled with batch distilling process. Hence, the higher price of Absolut vodka was justified given the innovative distillation adopted for high quality and taste. The above discussed aspects place the pricing aspect of Absolut in the luxury segment of spirits market. ?Absolut? Distribution Integration of distribution channels is a strategic decision that can enhance the marketing attributes of a brand (Ries & Trout, 1986). Absolut had done something similar by integrating its distribution networks with those of its international distributing partners to form the Absolut Spirits Co. which handles all Absolut import and marketing activities the world over and with special focus on distribution within the US (Clow & Baack, 2004). ?Absolut? Promotion The promotional element plays a vital role and is more strategic than rest of the marketing mix elements (Aaker, 2003). ...read more.

Given similar trends and globalization, there is not much difference between the markets within Europe and the US, hence, the advertising campaign of Absolut need not change to suit differential needs of both the markets. Moreover, choosing the same advertising campaigns for Europe and the US will save costs for Absolut. Hence, the reporter is of the view that the brand need not adopt different advertising strategies for Europe and US. Recommendations & Conclusions Every business sustains on its ability to grow and expand into new markets and hence it is recommended that Absolut can expand to new markets given that a market such as the US is being crowded with new competitors. The brand can also initiate production of non-alcoholic drinks where there is vast scope for differentiation. The reporter also recommends that Absolut should strengthen its corporate social responsibility as it is a market leader and should set example for several others. In conclusion, it can be said that Absolut had come a long way in the spirits market and has potential to explore into new markets. Differentiation strategy through advertising has been a critical success factor given that differentiation within the liquor industry is hard to achieve as there is narrow opportunity to differentiate quality as also observed by (Lewis, 1996). ...read more.