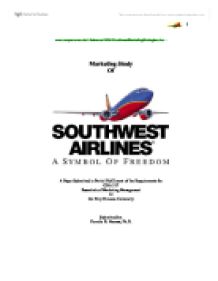 www.csupomona.edu/~lbabenes/ MBA/SouthwestMarketingStrategies.doc - Marketing Study Of A Paper Submitted in Partial Fulfillment of the Requirements for GBA 517 Essentials of Marketing Management At Cal Poly Pomona University Submitted by: Fiorello B. Abenes, Ph.D. Table of Contents Preface 3 Introduction 6 Company History 6 Regulatory Environment 7 Company Product 9 Target Market 9 Market Segment 9 Competitors and Competition 11 Product and Pricing 12 Product Positioning 12 Market Positioning Strategies 12 Marketing Strategies 14 Pricing Strategies 15 Distribution and Promotion 17 Product Distribution Strategies 17 Promotion Strategies: Marketing Mix 19 Frequent Flyer Awards 20 Advertising 20 Television Sports Advertising 22 Public Relations 24 E-Commerce Promotion 28 Internal Marketing 30 Conclusions 34 Reference List 37 Preface I chose to study the marketing strategies of Southwest Airlines (SWA) for this paper because I believe it is the best managed airline in the United States, if not the world. As a business student, stockbroker, and investor, I try to find companies in beleaguered industries that manage to do well in comparison to its competitors. By doing this, I hope to find business paradigms that help me in my MBA studies as well as find profitable investment opportunities for my clients. During the months following the terrorist attacks of September 11, virtually every major U.S. air carrier has downsized, laid-off workers, grounded aircraft, and disrupted air service. Southwest, in contrast, has steadily grown: no employees have been furloughed and not a single aircraft was grounded (Southwest Airlines 2002 Annual Report). How did Southwest manage to eke out a profit while its competitors drowned in red ink? One would say it pared down its operating costs that were already the lowest among major airlines (Lim, et al, 2003); but it was more than that. It responded to the tragedy and convinced a petrified public to fly again through excellent marketing. My wife and I were six miles from the Pentagon visiting our grandchildren when the tragedy of September 11 happened. ...read more.

If imitation is the sincerest form of flattery, then Southwest should indeed feel flattered. Advertising By a large margin, the most common form of promotion in the airline industry is by advertising in print and television. For airlines, it is a challenge to make advertising relevant and meaningful to different segments of customers. They must avoid a blandness, which lacks appeal and leads to little consumer awareness, as their message can easily get lost in the general clutter of advertising. With the airline product having to conform to being a "safe, affordable, convenient and efficient air service for consumers" - the Department of Transportation's generic view (Shenton, 1994) - there are great difficulties, in an essentially common environment, to achieve brand differentiation. For Southwest Airlines, promotion starts with the insightful understanding of customer benefits and how to translate those benefits into meaningful products and services. It pays great attention to consumer insights and to brand building, and that devotion contributes significantly to the value of the brand. In both print and television, SWA continues to employ the most basic form of price competition by running ads that encourage people to visit their website for the best online deals (Rewick, 2001). With this strategy, Southwest has successfully repelled the competitive efforts of online ticket discounters. In September 2000, Southwest began running ads that targeted several such sites, including Expedia.com, Priceline.com, and Lowestfare.com. The basic message to consumers was, "Don't believe the hype." The ads attempted to discredit the notion that the fares offered by these discounters and by other airlines on the Web are cheap and, thus, good buys. These efforts have been very successful. Whereas Southwest generates majority of its revenues from online purchases, other carriers only receive about 6% to 7% of their revenues through the Web (De Lollis, 2002). Southwest's marketing and advertising goal is to be very clear in their low-fare message but at the same time create and reinforce the company's nutty image (Freiberg and Freiberg, 1997). ...read more.