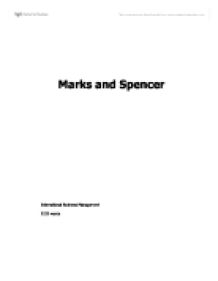 Marks and Spencer International Business Management 2133 words "M&S has been widely recognized as one of the best-managed companies in Europe" (Tse, 1985, p.1). This statement from 1985 shows the excellent reputation, M&S once enjoyed. Today, however, people frequently associate the term "failure" to this company. This essay is to examine the origins of M&S's success and show the basis of their competitive advantage. The question why they suffered the downturn in performance in the late 1990s arose is to be answered and their competitive strategy analysed. Afterwards the change in initiatives mounted since the departure of Richard Greenbury, a former chief executive officer of M&S's, will be evaluated and the main problems of the start of the 2000s described. In 1884 Michael Marks founded the "Penny Bazaar" in Leeds from which no item was more expensive than a penny. About a decade later Tom Spencer joined Marks in a partnership. In 1926 they changed the status of the company to a public one (Whitehead, 1994). Today fashion, which was M&S's core business, food, financial services and home furnishings are the fields they are active in. M&S had three major concerns about the management. Those were "Quality", "Value for Money" and "Human Relations" (Tse, 1985, p. 6). So they managed to establish a reputation for high reliability and good quality at a reasonable price. ...read more.

According to Michael Porter, there are three generic strategies that a company can employ to gain a competitive advantage over its competitors. The one M&S had applied successfully over a long time is the focus strategy (Johnson and Scholes, 1993). It concentrates on narrow and distinctive sectors; they set had a focus on differentiation which arose naturally. Usually companies try to develop differentiation artificially to distance themselves from competitors. As differentiation in the case of M&S developed naturally without artificial pushing Tse name them as "par excellence" example for this strategy. (Tse, 1985, p. 64) The following citation given by Tse (1985, p. 64) sums up the efficiency of this strategy in one sentence: "The secret of success of Marks and Spencer's differentiation strategy lies in the fact that is has clearly identified a genuine need on the part of the customers and has set and achieved such high standards in satisfying this need that it becomes extremely difficult for its competitors" One sub-strategy of M&S is the internationalisation strategy. In the early 1990s M&S started to perform under the name of Brooks Brothers in the United States of America and set up 22 Canada-based stores as joint ventures. One important aspect of this internationalisation strategy is that M&S decided to apply the same corporate strategy in all stores, irrespective of the domestic demands (Collier published in Johnson et al., 2006). ...read more.