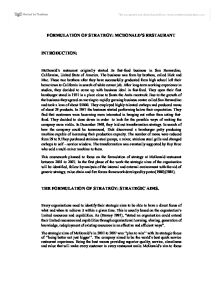 FORMULATION OF STRATEGY: MCDONALD'S RESTAURANT INTRODUCTION: McDonald's restaurant originally started its fast-food business in San Bernardino, Californian, United State of America. The business was form by brothers, called Dick and Mac. These two brothers after they have successfully graduated from high school left their home town to California in search of white corner job. After long-term working experience in studios, they decided to come up with business ideal in fast-food. They open their first hamburger stand in 1937 in a place close to Santa the Anita racetrack. Due to the growth of the business they agreed on moving to rapidly growing business centre called San Bernardino and took a loan of about $5000. They employed highly talented carhops and produced menu of about 29 products. In 1947 the business started performing below their expectation. They find that customers were becoming more interested in hanging out rather than eating fast-food. They decided to close down in order to look for the possible ways of making the company more viable. In December 1948, they laid out transformation strategy. In search of how the company could be turnaround, Dick discovered a hamburger patty producing machine capable of increasing their production capacity. The number of menu were reduced from 29 to 9.They purchased stainless steel pumps, a mixer, stainless steel grills and changed carhops to self - service window. The transformation was eventually supported by Ray Kroc who sold a multi-mixer machine to them. ...read more.

McDonald's launched ''I'm lovin it'' campaign on 29 September 2003 to attract young consumers. This campaign was integrated in all areas of the company, from crew training, restaurant experience to national sponsorships, promotions, television, internet etc. The attraction of McDonald's to young kids is a source of competitive advantage. Another generic strategy of McDonald's is its franchise system. McDonald's operates close to 21,000 franchised outlets in different markets (Lentz and Setrakian, 1997).The company has gained business success in its franchise operations. What it does is to allow a person that is interested in venturing in to fast-food business to use its brand for a fee. The licence agreement enable McDonald's to set the standard of cleanliness, quality and best practice that must be adhered to by the franchisees. Every franchisee must ensure it complies with the standard of McDonald's branding, menus, design layouts and administration systems. Franchising enables McDonald's to enjoy considerably faster growth and the creation of a global brand identity as well as increased economies of scale that has led to its competitive advantage in the fast-food industry. INTERNAL ANALYSIS; VALUE CHAIN ANALYSIS The term 'value chain' was used by Michael Porter (1985) in his book "competitive advantage; creating and sustaining superior performance". Brown (1997),"described value chain as a tool to disaggregate a business in to strategically relevant activities". A business could achieve competitive advantage by performing these activities more cheaply and more effectively compare to competitors. ...read more.

that affected McDonald's profitability in (2003). The threat of substitute is relatively high in fast-food industry. Fast casual chain that is fresher than fast-food are spreading all over countries. For example caf� de coral (Hong Kong Chain), Sunway (American Chain) etc are increasingly popular to the extent of taken the larger market share from McDonald's (independent 2003). CONCLUSION It can be deduced that there is relatively high level of coherence of the firm's strategic aims of being better not just bigger and the strategic choices, resources, and capabilities from the period of 2001 to 2007. The strategic choice of differentiation and cost leadership enabled the firm to concentrate on the development of capabilities that contributed to the performance of those activities that added value to customer. From the analysis, McDonald's will continue to be the leader in the fast food industry because of its large market share, product innovation, geographical reached, employee development, improvement in technology as well as its marketing strategy. The company was able to link its supporting activities such as staff training, technology (software) to the primary activities such as inbound logistics, operation, and marketing to create product customer value. Although, the firm's franchise operation increases its business expansion but it also created rivalry among the franchisee, non HALAl food, health concerns, not targeting older customer are some of the weaknesses. The five forces analysis shows that the industry is still attractive to McDonald's as it has been able to create larger geographical reach, good marketing strategy, staff training, brand loyalty and product innovation in sustaining competitive advantage. ...read more.