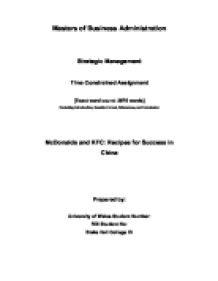 McDonalds and KFC: Recipes for Success in China

Masters of Business Administration Strategic Management[d1] Time Constrained Assignment [Exact word count: 3976 words] Excluding Introduction, Question in text, References, and Conclusion McDonalds and KFC: Recipes for Success in China Prepared by: University of Wales Student Number: RDI Student No: Blake Hall College ID TABLE OF CONTENTS 1. INTRODUCTION 4 A. CHINA'S ATTRACTIVENESS 4 B. COMPANY BACKGROUNDS 4 2. QUESTION ONE 5 A. BACKGROUND 5 B. PROCESSES 6 I. IS CONSUMER TASTE SIMILAR TO THAT OF OUR HOME COUNTRY? 6 II. CAN WE PROCURE QUALITY RAW MATERIALS? 6 C. MY CONCLUSION 7 3. QUESTION 2 8 A. ANSOFF MATRIX 9 B. INDUSTRY LIFE CYCLE 10 C. PESTEL 12 D. PORTER'S FIVE FORCES 13 4. QUESTION 3 14 A. BACKGROUND 14 B. POSSIBLE CULTURAL ISSUES AND METHODS OF MANAGEMENT 15 I. EMPLOYMENT 15 II. CUSTOMERS 15 III. BUSINESS PARTNERS 16 IV. CORPORATE CULTURE 17 5. QUESTION 4 17 A. SUPPLY CHAIN 18 B. LOGISTICS 19 6. CONCLUSION 20 7. REFERENCES 21 1. INTRODUCTION a. CHINA'S ATTRACTIVENESS China's decision to relax some of its fiscal policies and restrictions towards international business has led to an invasion of its economy by foreign multinationals that aim to get a slice of what the country has to offer. The benefits of doing business in China are immense, there is a large population exceeding 1.3 billion, a booming economy whose GDP rises on an average of 9% yearly, and increased consumer spending amongst its populace due to an economic boom. Foreign quick service restaurant chains such as McDonalds and KFC have been quick to identify and successfully expand their foreign operations into the country. b. COMPANY BACKGROUNDS KFC, also known as Kentucky Friend Chicken is a chain of over 15,500 fast food restaurants. The company was established in 1930 and has expanded aggressively in international markets into becoming one of the largest fast food restaurant chains in the world. ...read more.

The economical situation within the country, in terms of its GDP is also highly favourable, as China has had an average GDP increase of over 9% since 1978. However per capital income was very low at $621.01 due to the country's over 1.3 billion people. However, China has enjoyed favourable economic conditions in recent years that have facilitated a better welfare for its citizens. Also socio-cultural factors such as the Chinese culture are strong and very different from that of western cultures. Therefore there is a huge emphasis for firms to effectively leverage their core competencies, whilst still adapting to the local culture. Technology and infrastructure development is also low, but is improving due to improving economy. Environmentally, transportation systems are not well developed, especially those that would facilitate an effective logistics operation. The legal system is also not as developed as those in western countries where these companies primarily operate. Therefore these foreign quick services companies could utilize this framework in ascertaining how the macro environment, and consumer behaviour would affect the industry in the foreseeable future, and their prospects of a successful market entry (Johnson et al, 2008). However, Lynch (2009) criticises against the sole use of the PESTEL framework as it is a measure of past occurrences and it does not necessarily portray what could happen tomorrow. Also it fails to account for the effect of the international political economy and hegemony bodies, and their influence on macro economic factors in a country. d. PORTER'S FIVE FORCES Porter proposed the Five Forces model in order to ascertain how the competitive pressure industries affect firms' profitability. Organizations aiming to assess a new foreign market, or evaluate their current marketplace would need to examine the competitive pressure within the industry. These five forces, according the Porter (1980), could shape the profitability of the industry in coming years. Therefore, based on the case study, a foreign fast food brand, aiming to enter in China for instance, would face competitive rivalry from the already established foreign brands (McDonalds, KFC and Burger King) ...read more.

This strategy allowed for another 10% reduction in costs. McDonalds in contrast, chose not to adopt local measures, but had its global logistics partner Havi Food, set up a logistics business in China, even prior to McDonalds market entry into the country. The need to establish one's own logistics department compared to outsourcing it to local or global partners is a decision that both companies had to make. However, whilst KFC enjoyed the benefits of using local partners who were well adverse in the logistics market within China, McDonalds decided to have its global partner set up operations in the country prior to its arrival. Thought the benefits of long-term contractual and strategic alliances do seem beneficial to both parties (Dorfman and Howell, 1988), I believe KFC has a better advantage by establishing its own logistics department, which has enabled it to save money. 6. CONCLUSION Based on these questions and subsequent answers, it is therefore no surprise how KFC has been able to overtake McDonalds in the Quick service restaurant market within China. They have been able to provide localised food, train educated graduates into future managers, recognise cultural diversity and utilise this in appealing to consumers and employees, and also setting up localised distribution networks that saved costs and increase efficiencies. China is thriving fast food market, with immense opportunity for growth and new market entries that would provide better value to the population. 7. REFERENCES Ansoff, I. (1957) Strategies for Diversification, Harvard Business Review, Vol. 35 (5), Sep-Oct, pp.113-124 Bond, M. (1987) Chinese values and the search for culture-free dimensions of culture, J Cross-Cult Psychol 18 (1987), pp. 143-164 Bordonaba-Juste, V., Lucia-Palacios, L., and Polo-Redondo, Y. (2010) Influence of Franchisors' Competitive Strategies on Network Size: The Impact of Entry Timing Decision. Journal of Marketing Channels, 17(1), 33-49 Collis, D. and Montgomery, C. A. (2008) Competing on Resources, Harvard Business Review, Jul-Aug p140-150 Comaford-Lynch, C. (2007). To Get Financed and Stay Financed, Innovate. BusinessWeek Online, 18 Curtis, K. R., McCluskey, J. J., and Wahl, T. I. ...read more.