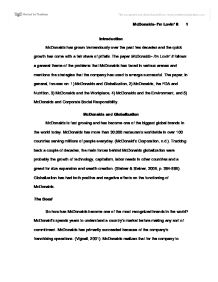 Introduction McDonalds has grown tremendously over the past few decades and the quick growth has come with a fair share of pitfalls. The paper McDonalds- I'm Lovin' It follows a general theme of the problems that McDonalds has faced in various arenas and mentions the strategies that the company has used to emerge successful. The paper, in general, focuses on: 1) McDonalds and Globalization, 2) McDonalds, the FDA and Nutrition, 3) McDonalds and the Workplace, 4) McDonalds and the Environment, and 5) McDonalds and Corporate Social Responsibility. McDonalds and Globalization McDonalds is fast growing and has become one of the biggest global brands in the world today. McDonalds has more than 30,000 restaurants worldwide in over 100 countries serving millions of people everyday. (McDonald's Corporation, n.d.). Tracking back a couple of decades, the main forces behind McDonalds globalization were probably the growth of technology, capitalism, labor needs in other countries and a greed for size expansion and wealth creation. (Steiner & Steiner, 2006, p. 384-386). Globalization has had both positive and negative effects on the functioning of McDonalds. The Good So how has McDonalds become one of the most recognized brands in the world? McDonald's spends years to understand a country's market before making any sort of commitment. McDonalds has primarily succeeded because of the company's franchising operations. (Vignali, 2001). McDonalds realizes that for the company to succeed globally, the ideas that work in one country might not work in another. McDonald franchises do business and maintain relationship with the local supplier, which enables the company to develop products based on the local people's needs. ...read more.

(Mcspotlight.org, n.d.) but also for not reusing and recycling McDonalds containers. (Environmental Defense-McDonald's Waste Reduction Task Force [ED-MWRTF], 1991). The Environmental Defense Fund (EDF), an advocacy organization that had been critical of McDonald's on-site recycling plans, approached McDonalds' to discuss the environmental issues. McDonald's and EDF established a joint task force on August 1st 1990. (ED-MWRTF, 1991). Many real environmental improvements were generated by the task force. The task force tried to integrate the environmental concerns with the corporations packaging decisions. The main objectives of the task force were to find ways to reduce the solid waste, to reuse the packaging materials, and to use recycled materials in the day-to-day operations of the restaurants. (ED-MWRTF, 1991). In August 1991, McDonalds, in league with the Environmental Defense Fund, developed the Waste Reduction Action Plan (WRAP) (McDonalds Corp, 1994), which was to reduce 80% of McDonalds' solid waste (McDonalds Corp, 1994) and hence, alter the company's interaction with suppliers, customers, employees and franchisees and give the company a competitive advantage over others. Preservation of Amazon Rainforests Up until mid-2006, McDonald's chickens (which were being supplied to the European restaurants) were being fed on soy grown in the Amazon rainforests in Brazil. (Greenpeace.org, 2006). In order to cultivate soybeans, the cultivators were destroying huge chunks of the rainforest and hence, McDonald's and other fast food giants were held responsible for the deforestation of Amazon. (Greenpeace.org, 2006). Based on the environmental agency Greenpeace's research on the causes for Amazon's deforestation, McDonald's has agreed not to use chicken fed with soy grown in the Amazon. ...read more.