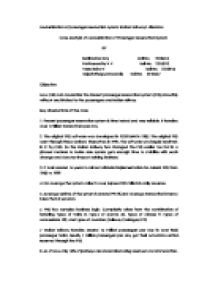 Modernization of passenger reservation system: Indian Railways' dilemma Case Analysis of Modernization of Passenger Reservation System BY Sunil Kumar Ray Roll No. 2218624 Parthasarathy V V Roll No. 2218912 Venu Babu V Roll No. 2218915 Rajesh Bhagwan Kondle Roll No. 2218607 Objective How CRIS can modernize the Present passenger reservation system (PRS) smoothly without any hitches for the passengers and Indian railway. Key observations of the case 1. Present passenger reservation system is time tested and very reliable. It handles over 1 million transactions per day. 2. The original PRS software was developed in FORTRAN in 1985. The original PRS went through three versions. Thereafter, in 1997, the software was largely rewritten in C by CRIS. So the Indian Railway has changed the PRS earlier too but in a phased manner to make sure system gets enough time to stabilize with each change and does not impact existing business. 3. It took around 14 years to roll out all India implementation for current PRS from 1985 to 1999. 4. On average the system collects over Rupees 200 million in daily revenue. 5. Average uptime of the system is around 99.2% and average transaction latency is less than 3 seconds. ...read more.

Starting with one station and few trains should be made available on new system and then slowly migrating more trains and stations. This will gives new system enough time to stabilize and get tested for increasing load rather than testing it for 7 millions plus transactions and taking a huge risk of a big failure. 6. Indian railway should continue with its existing system by enhancing it incrementally for only must needed features till new system is developed and proved to be reliable over time. This will make sure Indian Railway is never on the risk of loosing serious business and can always use existing system as backup till new system stabilizes. 7. Given the new system has to develop complex business logic it will not be easy to implement everything right at first attempt. So IR should go for incremental development of new system. 8. Indian railway should definitely re-use some of the best features of existing system to control cost of developing new system. The existing features like proprietary networking protocol to share information between 5 clustered servers connected through its own leased lines. ...read more.

Yep, the cost is a big issue in this situation. It is interesting because I just associate this to Riley's idea of funding (which I believe is a very good point). If IR has support from government, the cost of operating tow system should not be a problem. If not, I think I will still consider the smooth changing process to be the first priority as IR should be responsible for all travelers. RD: 3) Attitude/willingness of IR employees to adopt a new PRS and following that, their perceived ability to do this efficiently (with a reasonable amount of training). JC: I really like the idea of that as well and I think the attitude or willingness of employees is very important for any company which planning to make a change. To further this point, I am thinking how about the attitude of the public as they might be another group of people that influence by both systems. IR might concern whether travelers are willing to accept the inconvenience during the system changing period or they are hoping to maintain the existing situation. Just a thought as it might be too far away from the case. ?? ?? ?? ?? ...read more.