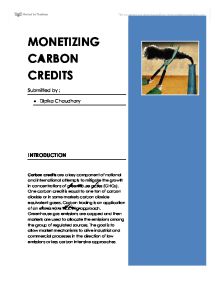 Monetizing carbon credits - Carbon trading is an application of an emissions trading approach. Greenhouse gas emissions are capped and then markets are used to allocate the emissions among the group of regulated sources. The goal is to allow market mechan

MONETIZING CARBON CREDITS Submitted by : * Dipika Chaudhary INTRODUCTION Carbon credits are a key component of national and international attempts to mitigate the growth in concentrations of greenhouse gases (GHGs). One carbon credit is equal to one ton of carbon dioxide or in some markets carbon dioxide equivalent gases. Carbon trading is an application of an emissions trading approach. Greenhouse gas emissions are capped and then markets are used to allocate the emissions among the group of regulated sources. The goal is to allow market mechanisms to drive industrial and commercial processes in the direction of low emissions or less carbon intensive approaches than those used when there is no cost to emitting carbon dioxide and other GHGs into the atmosphere. Since GHG mitigation projects generate credits, this approach can be used to finance carbon reduction schemes between trading partners and around the world. Origin: Mechanism A credit can be an emissions allowance which was originally allocated or auctioned by the national administrators of a cap-and-trade program, or it can be an offset of emissions. Such offsetting and mitigating activities can occur in any developing country which has ratified the Kyoto Protocol, and has a national agreement in place to validate its carbon project through one of the UNFCCC's approved mechanisms. Once approved, these units are termed Certified Emission Reductions, or CERs. ...read more.

Example Emissions trading through Gains from Trade can be more beneficial for both the buyer and the seller than a simple emissions capping scheme. Consider two European countries, such as Germany and Sweden. Each can either reduce all the required amount of emissions by itself or it can choose to buy or sell in the market. Example MACs for two different countries For this example let us assume that Germany can abate its CO2 at a much cheaper cost than Sweden, e.g. MACS > MACG where the MAC curve of Sweden is steeper (higher slope) than that of Germany, and RReq is the total amount of emissions that need to be reduced by a country. On the left side of the graph is the MAC curve for Germany. RReq is the amount of required reductions for Germany, but at RReq the MACG curve has not intersected the market allowance price of CO2 (market allowance price = P = ?). Thus, given the market price of CO2 allowances, Germany has potential to profit if it abates more emissions than required. On the right side is the MAC curve for Sweden. RReq is the amount of required reductions for Sweden, but the MACS curve already intersects the market price of CO2 allowances before RReq has been reached. Thus, given the market allowance price of CO2, Sweden has potential to make a cost saving if it abates fewer emissions than required internally, and instead abates them elsewhere. ...read more.

It is important to note that the more attractive an MMSD becomes in a post-2012 regime, other things being equal, the less incentive any developing country has to take on targets that entail lost access to the mechanism. If the post-2012 regime includes a radically expanded MMSD that covers sectoral and NAMA initiatives, it is offering governments the opportunity to fund a variety of policies and programs that they might have as current priorities, but for which they lack the requisite resources. This clearly counts as a more attractive MMSD. Several questions need to be answered over the next eight months as the world comes closer to elaborating a post-2012 regime for international action on climate change, including: 1. Which market mechanisms offer the greatest potential for developing country participation in a post-2012 regime? 2. What types of transition mechanisms might encourage large developing country emitters and advanced developing countries to take on meaningful actions and/or commitments? 3. Should developed countries be encouraged to allow greater access to international credits within their regulatory regimes? What steps should be taken to improve the integrity of such credits? What are the best approaches for dealing with additionality? 4. What is the best way to deal with the permanence issues in crediting mechanisms for REDD or soil carbon sequestration to encourage increased developing country participation in the carbon market? 5. ...read more.