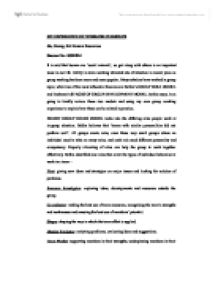 My experience of working in groups

MY EXPERIENCE OF WORKING IN GROUPS Jie, Huang, BA Human Resources Student No: 05991814 It is said that human are 'social animals', so get along with others is an important issue in our life. Ability in team working attracted lots of attention in recent years as group working has been more and more popular. Many scholars have worked in group topic, while two of the most influential theories are Belbin's GROUP ROLE MODEL and Tuchman's STAGES OF GROUP DEVELOPMENT MODEL. In this essay, I am going to briefly review these two models and using my own group working experience to explain how these can be related in practice. BELBIN GROUP ROLES MODEL looks into the differing roles people work at in-group situation. Belbin believes that 'teams with similar personalities did not perform well'. All groups create roles, even those very small groups where an individual need to take on many roles, and each role need different personality and competency. Properly allocating of roles can help the group to work together effectively. Belbin identified nine roles that cover the types of individual behaviour at work in a team - Plant: giving new ideas and strategies on major issues and looking for solution of problems. Resource Investigator: exploring ideas, developments and resources outside the group. ...read more.

Group members will be proud of their achievement and enjoyable corporation. Some also refer the stage as 'Deforming and Mourning', recognising the sense of loss felt by group members. Tuchman's work described the way groups evolve as he observed, whether they were conscious of it or not. In practice, the model help us to have more awareness what is going to happen through group evolving process, and help it to move to the Performing stage. Bind these theories in mind, I revised my own experience of being a part of a charity project group while in college. During my business course in college, we were divided into 5-6 people groups, and required to produce a business plan in any preferred business. After discussion, we chose the greeting card business, which would be sold in UK marked, based in London for design and management, and outsource production in China. The background of each of us is as following: - Gautam, a sober and prudent guy. As his parents run a greeting card in India, he knows quite well about the procedure of greeting card business. - Victoria, sophisticated, smart, prudent and hard-working girl, who has two years working experience after her high school. She is also the most mature one in us. ...read more.

Our group went through all five stages described by Tuckman. As we were classmates in the same course, we went through stage one very quickly. The storming stage mostly involve in the first week when we discussed which kind of business we should choose. However, every conflict were dealt quickly and smoothly, this was partly because we know each other very well already, and also because no one of us has dominate personality, and I would like to say everyone in our group is very nice, helpful and hard working. So as long as we decided to do the greeting card business, we soon engaged to norming stage and set up the rules each one should follow. We did support each other, and our communication had always been very good. Based on the successful previous stages, our group perform very well, successful developed the business plan, and our report got second highest score in eight groups. Finally, although our task had finished, all five of us became very good friends, and keep in good touch till now. After review the theories together with my own experience, I would conclude that, in practice, many group can work well even without awareness of this model. However, with these models' help, we can better understand what is happening and going to happen during groups development, and this awareness can help us to better resolve any possible problem and get the perform stage more quickly. ...read more.