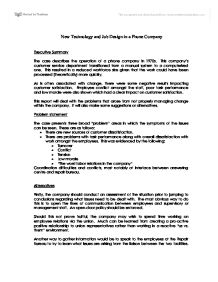 New Technology and Job Design in a Phone Company

New Technology and Job Design in a Phone Company Executive Summary The case describes the operation of a phone company in 1970s. This company's customer service department transitioned from a manual system to a computerized one. This resulted in a reduced workforce size given that the work could have been processed (theoretically) more quickly. As is often associated with change, there were some negative results impacting customer satisfaction. Employee conflict amongst the staff, poor task performance and low morale were also shown which had a clear impact on customer satisfaction. This report will deal with the problems that arose from not properly managing change within the company. It will also make some suggestions or alternatives. Problem statement The case presents three broad "problem" areas in which the symptoms of the issues can be seen. These are as follows: * There are new sources of customer dissatisfaction. * There are problems with task performance along with overall dissatisfaction with work amongst the employees. This was evidenced by the following: * Turnover * Conflict * Tension * Low morale * "The worst labor relations in the company" Coordination difficulties and conflicts, most notably at interface between answering centre and repair bureau. Alternatives Firstly, the company should conduct an assessment of the situation prior to jumping to conclusions regarding what issues need to be dealt with. ...read more.

We suggest that the desks be rearranged in cubicle-style seating with short walls between employees. This will provide a small amount of privacy and comfort while not interfering with the ability to make contact with others or to be monitored if need be. Although employees realize that their calls can be monitored and recorded, it sets a different tone to be under surveillance. With respect to the job design, we know that there is a disjoint between the answering centers and repair bureaus given the functional and divisional departmentalization (we assume that the call centre is geographically segregated from the repair bureaus). Given the physical separation and the fact that work orders are being handed off without much discussion (or so we assume), we can understand the concerns. Surely customer service people are getting flack from both the incoming call (from disgruntled customers) and from the repair side (who likely doesn't like being given orders). Although it isn't entirely clear what can be done to smooth the liaison point, we believe that an increase in communication may help. The company may wish to assess the way the organization is structured to see if it would be more sensible to set up small teams consisting of customer service employees and repair technicians as to avoid the disjoint between the two. Working as a team can often increase satisfaction and communication. ...read more.

As well, the cost of training and time will be spread out over the employees' tenure with the company. We have assumed that customers are already randomly completing satisfaction surveys. We are unsure whether these are being assessed on a per operator basis or simply across the board. In order to implement the recognition program they will need to be assessed individually. This shouldn't prove to cost much more in terms of dollar value or in time. The reward itself shouldn't be something that financially costs the company too much or else it may be deemed to be superficial. Instead, it should be a carefully thought out reward. It may be an idea to roll this idea into the mentoring program mentioned above, whereby operators with high ratings are given an opportunity to take on new tasks. If this wouldn't be deemed as an appropriate reward based on the employees, recognition via newsletter or card of thanks from senior management (along with a small gift) may be more appropriate. The team building ideas may prove to be expensive if they are done as a group. Costs can be kept down if they are done on via partnering or in groups but in small segments of time. Trust takes time so achieving goals will not be done overnight. It may be most worthwhile to have groups meet for small, but frequent (i.e. weekly) meetings. Without fully understanding the corporate climate it is difficult to make a true recommendation on how this should be designed. ...read more.