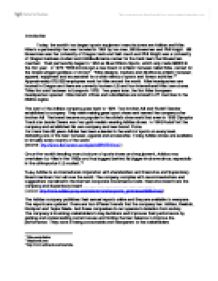 Introduction Today, the world's two largest sports equipment manufacturers are Adidas and Nike. Nike is a partnership that was founded in 1964 by two men, Bill Bowerman and Phil Knight. Bill Bowerman was the University of Oregon track and field coach and Phil Knight was a University of Oregon business student and middle-distance runner for the track team that Bowerman coached. Their partnership began in 1964 as Blue Ribbon Sports, which only made $8000 in the first year. In 1972, "BRS introduced a new brand of athletic footwear called Nike, named for the Greek winged goddess of victory"1 "Nike designs, markets and distributes athletic footwear, apparel, equipment and accessories for a wide variety of sports and fitness activities."2 Approximately 675,000 employees work for Nike around the world. Nike headquarters are located in Oregon and there are currently fourteen US and four international Nike town stores. "Nike first sold footwear to Europe in 1978. Two years later, the first Nike European headquarters opened. Nike branch offices and subsidiaries are located in 27 countries in the EMEA region. The start of the Adidas company goes back to 1924. Two brother Adi and Rudolf Dassler established a company. They were making great sport shoes and named the company after brother Adi. The brand became so popular in the athletic shoe world that even in 1936 Olympics Track star Jessie Owens won four gold medals wearing Adidas shoes. In 1948 Rudolf left the company and established his own company and new brand: Puma. For more than 80 years Adidas has been a leader in the world of sports on every level, delivering one of the best footwear, apparel and accessories. Today Adidas shoes are available in virtually every country of the world. (source: http://www.factmonster.com/ipka/A0932723.html ) Once the world's leading manufacturer of sports shoes and equipment, Adidas was overtaken by Nike in the 1980s and has lagged behind its bigger rival ever since, especially in the all-important US market."3 Today Adidas is an international corporation with shareholders and Executive and Supervisory Board members from all over the world. ...read more.

Legal: Nike Nike has been criticized for contracting with factories that use sweatshop labour in countries like China, Indonesia, Vietnam, and Mexico. Also supports the career of women with establishing its Global Women's Leadership Council. Nike was a number 13 from 31 on the Business Ethics Magazine list of 100 Best Corporate Citizens which was based on its community and environmental programs .Nike was recognized as the Best Workplaces for Commuters in 2004, 2005 and 2006 reducing traffic and air pollution. (source: www.nikebiz.com) Adidas Company has achieved a number of legal factors. 1998 ILO Declaration says that the company has to observe, promote and realise the core labour standards. It includes: * the abolition of exploitative child labour, * the abolition of forced labour, * the freedom of association and the right to collective bargaining, * the elimination of discrimination in employment and occupation on the basis of nationality, skin colour, religion, ethic origin, political beliefs or sex, * the right of employees to good health * reasonable working hours * a living wage The company states that their aim is to act responsibly and communicate honestly. Each year in their annual report they inform about their social and environmental programme, it is very important for the stakeholders. The website adidas.com covers online reporting and is updated during the year. The company do take into consideration labour standards. They include staff monitoring compliance, independent auditors, investing in capacity building and outreach, improving the performance in supply chain. (source: www.adidas.com) Trade Act 2002 SWOT analysis SWOT ANALYSIS FOR ADIDAS AND NIKE Each company will have its strengths, weaknesses, opportunities and threats. Here is a breakdown of each factor for both companies ADIDAS S.W.O.T ANALYSIS STRENGTHS -Adidas has strong management team and good corporate strategy in both North- American and overseas markets. -Advantage as first company to introduce e-commerce -Has brand recognition and reputation -Strong control over its own distribution channel -Strong customer base -Strong financial position with minimal long-term debts -Innovative designs in footwear enabling ...read more.

These sports figures4 not only score high marks in their game - but they also know as celebrities. Young man who idolize them want to play basketball like he does and wear the same shoes as well. Adidas heart is in football. The company has a big heritage in the game and the connection was always strong among football and Adidas. Adidas is a World leading football shoe brand and the strongest in Europe. To maintain its position is essential. Among the other famous sport people, David Beckham-UK's top football celebrity is representing the brand. Adidas is a global player - and represents its markets all over the world. But Nike - the main competitor - has NIKETOWN in the US, Europe and Australia, Adidas opened its first Adidas-Solomon flagship mega store in Paris. It was important to maintain the brand awareness and increase its visibility through the point of purchase as well. Adidas is a global company and one of its main responsibility is to be socially and environmentally response. That means reducing the environmental impact and caring for welfare and for the employees as well. Recommendations Conclusion As adverts in magazines and television make people more aware of their bodies and how to change them, the sports manufacturing business will continue to grow. The sports industry "is a dynamic and growing industry in the U.S., grows. "This is a truly global industry, and sports stir up deep passion within spectators and players alike in countries around the world. To one person, sports are a venue for gambling; to another, they are a mode of personal recreation and fitness, be it skiing, cycling, running or playing tennis. To business people, sports provide a lucrative and continually growing marketplace worthy of immense investments. To athletes, sports may lead to high levels of personal achievement, and to professionals sports can bring fame and fortune."5 1 Nike.com/nikebiz 2 Maplecroft.com 3 http://www.adbrands.net/de/adidas 1 www.adidas-group.com The Mintel International Group - footwear retailing 5 ibid ?? ?? ?? ?? ...read more.