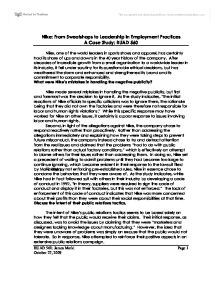 Nike: From Sweatshops to Leadership in Employment Practices A Case Study: BUAD 560 Nike, one of the world leaders in sports shoes and apparel, has certainly had its share of ups and downs in the 40 year history of the company. After decades of incredible growth from a small organization to a worldwide leader in its industry, it fell under scrutiny for its questionable ethical decisions, but has weathered the storm and enhanced and strengthened its brand and its commitment to corporate responsibility. What were Nike's mistakes in handling the negative publicity? Nike made several mistakes in handling the negative publicity, but first and foremost was the decision to ignore it. As the study indicates, "the initial reactions of Nike officials to specific criticisms was to ignore them, the rationale being that they did not own the factories and were therefore not responsible for labor and human rights violations." While this specific response may have worked for Nike on other issues, it certainly is a poor response to issues involving labor and human rights. ...read more.

Their initial response, as discussed, was to avoid the issues by claiming that they were "marketers and designers lacking knowledge about manufacturing." However, the idea that they were unaware of problems was simply an excuse that the public would not tolerate. So in response, Nike attempted to reinforce their positive aspects in an extensive public relations campaign. The first tactic used as part of the public relations campaign, hiring famous spokespersons, was an appeal to the uninformed public. The second tactic, specifically targeting a core segment of their business, was an appeal towards a more informed consumer of Nike products. Nike realized quickly that key stakeholders in their business were the colleges and universities that exclusively used their products, and they wisely tailored a public relations campaign geared towards ensuring that this key stakeholder was well informed of the steps that Nike was taking to address the allegations and improve their business. ...read more.

Nike's efforts have not gone without notice. As the study points out, Nike has appeared in Business Ethics magazine's list of "100 Best Corporate Citizens" in 2005 and 2006. In addition, since the study was published Nike appeared on that same list a third year in a row, climbing all the way to #3 in 2007.1 Not only that, but Nike has also "received a perfect score on the Human Rights Campaign Foundation's Corporate Equality Index two years in a row." Nike has clearly shown that it is committed to efforts that will improve the world it operates in. By recognizing and responding proactively to each of its key stakeholders, Nike has transformed its business in the course of a relatively short time period. They have realized the extremely valuable lesson that 'what goes around comes around.' Most importantly, Nike has set a precedent not just for other sports apparel companies, but for other industries: a precedent of corporate integrity and responsibility to their stakeholders. 1 Source: http://www.business-ethics.com/node/75 ?? ?? ?? ?? BUAD 560: James Markl Page 1 October 27, 2009 ...read more.