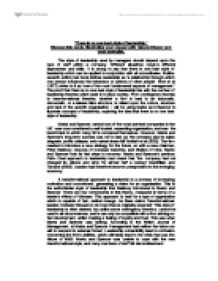 No one best style of leadership

Fiedler has himself 'revised or at least elaborated on the original assumptions about behaviour that could be based on LPC scores.' Fiedler (1972). This revision of his theory, in conjunction with the doubts expressed by critics portrayed a lack of belief of the theory. Another contingency theory is the Vroom and Yetton theory. This is based upon two aspects of a leader's decision- quality and acceptance. It analyses the effects a leader's decisions has upon a group's performance, and of the motivation and commitment of staff following the decision. The theorists suggest seven decision rules which must be answered by staff to conclude which leadership style is desired for a specific situation. Similarly to Fiedler, this theory was also later updated by Vroom and Jago, suggesting a total of twelve variables. The third theory is the Path- Goal theory. This is a 'different type of contingency approach, seeking to link leadership to the motivation of subordinates' Warr (1971). The theory is derived from the expectancy theory of motivation, and suggests that the performance of workers is dependent upon whether the managers satisfy their expectations. The theory exemplifies four types of leadership behaviour, and suggests that all these styles of leadership can be used by one person, depending on the situation. ...read more.

Adopting a contingency theory allows managers to adjust to a particular theory- best desired for the specific situation. However, contingency theories can lead to a lack of trust from employees, and leaders may interpret this style as inconsistent. A leader should be able to have a 'powerful impact on group performance' Vecchio (2000). Leadership is perhaps as it's most important when a firm is at a time of change and uncertainty. This was the case for Marks and Spencer, who needed a leader to change the organisation, and to restructure the original path- goal theory of leadership. After Peter Salsbury had joined the firm it was still clear, even with the introduction of his transformational leadership approach that there was still need for a change in the leadership strategies that were being used. Different employees respond to different styles of leadership, so it is impossible to say that there is one best style of leadership which can be used in conjunction with all subordinates. Whether it be a type of leader who is most appropriate for a particular stage of an organisation's development, or a style of leadership used for a group of followers- different types of situations should, theoretically be approached in different manners to ensure success. ...read more.