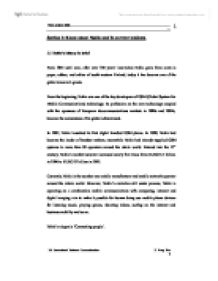 Section I: Know about Nokia and its current business 1.1 Nokia's history in brief From 1865 until now, after over 100 years' innovation Nokia grew from roots in paper, rubber, and cables of south-western Finland, today it has become one of the global telecom's giants. From the beginning, Nokia was one of the key developers of GSM (Global System for Mobile Communications) technology, its profession on the new technology coupled with the openness of European telecommunications markets in 1980s and 1990s, became the cornerstone of its global achievement. In 1992, Nokia launched its first digital handled GSM phone. In 1998, Nokia had become the leader of handset makers; meanwhile Nokia had already supplied GSM systems to more than 90 operators around the whole world. Entered into the 21st century, Nokia's market turnover increased nearly five times from EURO 6.5 billion in 1996 to EURO 21 billion in 2001. Currently, Nokia is the number one mobile manufacturer and mobile network operator around the whole world. However, Nokia's evolution still under process, Nokia is operating on a combination mobile communications with computing, internet and digital imaging, aim to make it possible for human being use mobile phone devices for listening music, playing games, shooting videos, surfing on the internet and business mobility and so on. Nokia's slogan is 'Connecting people'. 1.2 Nokia's current global market performance Figure 1.1: Net sales by business group 2007 Source: Adapted from www.nokia.com. Nokia nowadays organized in to four business groups: Mobile Phones, Network, Multimedia, and Enterprise Solutions. As the Mobile Phones business account for the largest percentage of the total sales of 49 % (see Figure 1.1), compare with 61 % in 2005, this case will concentrate on that business group. Figure 1.2: Nokia's financial performance 2007 EURm 2006 EURm Change % 2005 EURm Net sales 51 058 41 121 24 34 191 Operating profit 7 985 5 488 46 4 639 Profit before taxes 8 268 5 723 44 4 971 Net profit 7 205 4 306 67 ...read more.

(HC360.com, 2004) Enter the new century, due to China's huge potential market volume and the rapid growth, many global mobile vendors rush into China to get a piece of this big cake, such as Samsung, LG, and Sony Ericsson. Although Nokia entered advanced, but more and more intractable rivals enter into China from global market, besides, domestic players such as Ningbo Bird, TCL and Kangjia. These domestic vendors rely on the protection from policies like "Mobile produce licence" and "Network access licence", and because introduce a big amount of new models and the channel advantages Chinese mobile manufactures grew rapidly in recent years, even though their competition are still weak to those international opponents. As the evolution of mobile phones, smart phone and PDA (Personal Digital Assistant) have become the dominance in current mobile phone market worldwide. Therefore, the competitors of Nokia has included more traditional consumer electronics suppliers, like Apple, Dell, HP, Microsoft and Palm those who began to produce and sell the smart phone and PDA, Nokia is influenced by these mobile market "transferred students". Moreover, "The mobile communications industry now also includes increasing numbers of participants that provide specific hardware and software layers within products and solutions." (Euromonitor International, 2007) Nokia is facing the challenges from these competitors, not only merely deal with the complete products and solutions, but also the operating systems. Finally, Nokia is facing growing competition from low-cost upstarts in China mainland, and those who are trying to enter the market through aggressive pricing for example Taiwan and Korea. Facing these competition and challenges, Nokia must protect its market share in China through its marketing strategies, good quality supply chain, marketing mix, strategic co-operation and new product develop policy, all above will illustrated in following parts. 3.2 Marketing (Operational) strategy In order to increase its competitive advantages, Nokia always concern on its marketing strategy. As Robert Anderssonthe, vice CEO of Nokia in Asia Pacific Region announced that Nokia would continue with its localization strategy to maintain and expand the market share in China. ...read more.

In China, Nokia's attraction makes not only a trend or fashion, but also makes a habit, when people go to a store to buy a mobile, 5 in 10 will go to Nokia Shoppe first to check out if there are any favour. Nokia's dominant position in China, not only because its classic user-interface, unique technological advance, but also because it has established a good quality and reputation image or conception in Chinese mind. Section V: Conclusion and Forecasting The last but absolutely no least, with the global mobile subscriber expected to reach 3 billion and 6 hundred thousand in China in 2008, where the market remains attractive potential for Nokia. By 2009, mobile handsets volume expected to reach one billion annually. (Euromonitor International, 2007) Nokia is likely to hold its current market-leading share and perhaps to expand in developing markets, for example China, which market will be the key to future sales growth to Nokia. Nokia wants to keep its NO. 1 place worldwide as well, besides the sale growth for competition, the growth in new subscribers also expected to remain at over 4 hundred million new subscribers annually of which 90% are in its existing markets. (Euromonitor International, 2007) Anyway, one major threaten for Nokia's dependence on developing markets is the increasing price competition from its rivals, which will limited the margin of Nokia. However, become more and more popular of its higher-priced replacement phones in China might help Nokia to increase its average selling price of mobile phones. Moreover, Nokia is preparing to inject more fashion elements into its multimedia Nseries product line, to attract more customers who are interesting on this kind of advanced and expensive mobile models. Base on the successes in China, Nokia's road still long and flat in this rapid growing market, the competitive advantage stands by its side. Nokia's evolution is still under process, because Nokia will always keep going on finding new ways of connecting people. ...read more.