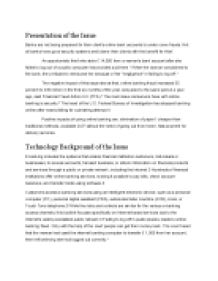 Online Banking and the Problem of Fraud.

ï»¿Presentation of the Issue Banks are not being prepared for their client's online bank accounts to under come frauds. Not all banks have good security systems and blame their clients with the benefit for thief. An opportunistic thief who stole £ 14,000 from a woman's bank account after she failed to log out of a public computer has avoided a jail term.¹ When the woman complained to the bank, they refused to reimburse her because of her "negligence" in failing to log off.¹ The negative impact of this issue shows that, online banking fraud increased 55 percent to £39 million in the first six months of the year compared to the same period a year ago, said Financial Fraud Action U.K.(FFA).² The main issue consumers have with online banking is security.³ The head of the U.S. Federal Bureau of Investigation has stopped banking online after nearly falling for a phishing attempt.4 Positive impacts of using online banking are; elimination of paper³, cheaper than traditional methods, available 24/7 without the need of going out from home, fast payment for delivery services. ...read more.

The rise in banking fraud comes as U.K. banks have taken more rigorous measures to combat online fraud.² While U.S. banks have often only require a log-in and password to get access to online banking, U.K. banks often have several more steps.² The most known fraud is phishing. It has become widely popular not only present in online banking. People lose a great amount of money with this fraud, due to the fact that they are not aware there are the victims of phishing. If the fraud is small usually clients to do not recognize it, and it is harder to get their money back from the bank. Only if the phishing is done for a big scale of consumers, it can be identified by the bank software. FBI Director Robert Mueller said he has recently came "just a few clicks away from falling into a classic Internet phishing scam" after receiving an e-mail that appeared to be from his bank.4 "Far too little attention has been paid to cyber threats and their consequences," Mueller said.4 "Intruders are reaching into our networks every ...read more.

The solutions arising from my issue, should be implied by banks. They should install better security software, so that online banking fraud will be eliminated or at least reduces. A U.K. security company is giving to banks, for free, security software that it says can block malicious software from manipulating online banking transactions or stealing data, even if the computer is infected.9 Online banking should be fast, easy and secure.8 Firstly and foremost, the site should be secure with strong validation process and data encryption.8 For example, NatWest- owned by the Royal Bank of Scotland Group- requires customers to enter their birth date plus a unique four digit code.² During the second step, a person is prompted to enter some digits of a separate four-digit PIN (Personal Identification Number), which is not the same as the person's at ATM card.² Even if banks install new security software, it won't eliminate online banking fraud completely. This can only cause reduction, because hackers will unlock the codes to the online bank software. This will take time but as the new security system is created by human it can be unscrambled by them. ...read more.