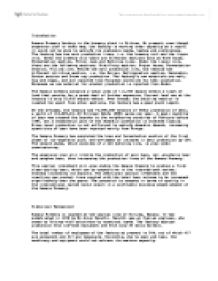 Introduction Asmara Brewery factory is the brewery plant in Eritrea. At present, even though expansion plan is under way, the factory is working under capacity as a result it could not be able to satisfy its customers needs, tastes and preferences. The factory has two main production lines, i.e. the brewery unit and the liquor unit. Under the brewery unit there are different sections such as Brew house, Fermentation section, Filter room and Bottling lines. Under the liquor unit, there are the following sections. Distillery section, Liquor house, Fermentation section, Filling line. Beside the main production line, the factory has different utilities section, i.e. the Boiler, Refrigeration section, Generator, Carton section and Crown cap production. The factory's raw materials are malt, hop and sugar, and are imported from European countries for beer production. Molasses as raw material for alcohol production is imported from Sudan. The Asmara brewery occupies a total area of 111,505 square meters a tract of land that permits for a great deal of further expansion. Current land use at the factory is only 55,452 square meters. Even though, the bottling section is located far apart from other sections, the factory has a good plant layout. On the average, the factory has 74,085,582 bottles of 350cc production of beer, a worth of 143,829,441.00 Eritrean Nakfa (ERN) sales per year. A small quantity of beer was crossed the boarder to the neighboring countries of Ethiopia before 1997, but a substantial part of the domestic production is consumed locally. Since local production is not sufficient to satisfy domestic demand, increasing quantities of beer have been imported mainly from Europe. The Asmara Brewery has completed the brew and fermentation section of the first phase of its expansion plan, and envisages an increase in beer production by 50%. The second phase, which consists of a new bottling line, is also under commissioning. The expansion plan will involve the production of sour beer, non -alcoholic beer and sorghum beer, thus increasing the production lines of the Asmara Brewery. ...read more.

Though the factory is trying to introduce different types of beer products, since, did not introduce non-alcoholic beer, the factory cannot exploit the potential customers that are 50% of the Eritrean population is Moslem followers. The factory's product is of standard quality, even to the extent that the quality was superior as compared to the neighboring countries beer products. For instance, till 1997 the factory was the major exporter of beer to Northern Ethiopia. At that time the tests and performances of the customers was very high. Rapid Expansion of Advanced Technologies Although the initial cost of these assets is high, the benefits go far beyond a reduction in labor costs. Increased product/service quality, reduced scrap and material costs, faster responses to customers needs, and faster introduction of new products and services are a few of their benefits. The Asmara Beer factory is expanding its bottling plant with automated machineries imported from Germany. Their production volume will be absorbed in the local market (90%), and they will have a plan to export the remaining quantities to the Middle East in the form of non-alcoholic beer. After commissioning, renovation and expansion project of the new filling plant, beer production capacity of the factory will almost double. The expansion of the factory is under way with modern technology that is, the first phase of expansion of brew house and fermentation section has been completed and the second phase of bottling section is under commissioning. Scarcity of Operations Resource The scarcity of funds, employees, and other operations resource need a wise allocation in order to use them efficiently. The production process section of the Asmara Brewery has been built far apart among each other, like the brew house, fermentation section, filtration section, and the filling plant. This implies the factory has used enormous space; long pipelines, more energy, high maintenance cost, and these can result in wastage of resources. ...read more.

Recommendation and Conclusion � As a long-term plan, the factory needs to have two main separate liquid waste lines. One for sewage and the other for production process liquid waste. The later should also be divided into two minor branches, the first branch for recyclable wastewater and the second branch for highly contaminated effluent. It is recommended that a treatment unit be installed to treat-contaminated effluent before it is discharging from the factory. � The quantity of water annually consumed by the factory is in the range of 140,000-300,000m3. A lion's share of this consumption is finally drained as wastewater. A large percentage of the wastewater of the factory could be recycled. It is recommended that a detailed study on the possibility of recycling of the industrial wastewater of Asmara Brewery be carried out. � The spent grain left-over after the brewing process which is given away to farmers to use as cattle feed, and making to convert spent grain waste to usable product to implement a waste to energy process via biogas. If the factory management deeply studied the cost benefit analysis of the two options they can choose which ever is profitable. � It is therefore recommended that, the packing section and pasteurizing is accident-prone, and of high leakage, reserve-packing machine is to be purchased and installed so that when one of the two machines is broken or in under repair the other could operate. The workers will then not be exposed to accident that will be caused by exploding bottles. � Shades have to be built to reduce rate of breakage of bottles, and that the quantity of bottles stored in stock should be optimized and kept for long. � Beer quality is more consistent and there is less wastage, when automated and accurate process control is used. � Improving its marketing activities and develop, its marketing expertise by giving extensive training for the production and marketing staff. Promotional and sales activities should be strengthened. ...read more.