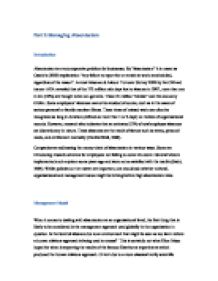 Part 1: Managing Absenteeism Introduction Absenteeism is a very expensive problem for businesses. By "absenteeism" it is meant as Cascio's (2000) explanation: "any failure to report for or remain at work as scheduled, regardless of the reason". Annual Absence & Labour Turnover Survey 2008 by the CBI and insurer AXA revealed that of the 172 million sick days lost to absence in 2007, more than one in ten (12%) are thought to be non-genuine. These 21 million "sickies" cost the economy �1.6bn. Some employees' absences cannot be avoided of course, such as in the cases of serious personal or family member illness. These times of missed work can often be recognised as long in duration (defined as more than 1 or 2 days) on review of organisational records. However, research also indicates that an estimated 52% of total employee absences are discretionary in nature. These absences are the result of factors such as stress, personal needs, and entitlement mentality (VanDerWall, 1998). Companies are addressing the money-drain of absenteeism in various ways. Some are introducing rewards schemes for employees not failing to come into work. General Motors implemented such a system some years ago and were not so satisfied with the results (Sadri, 1995). Whilst policies on the matter are important, one should ask whether cultural, organisational and management issues might be lurking behind high absenteeism rates. Management Model When it comes to dealing with absenteeism at an organisational level, the first thing that is likely to be considered is the management approach used globally in the organisation in question. ...read more.

By definition, leadership is the relationship through which one person influences the behaviour or actions of other people (Mullins, 2007). A transformational leadership for instance is likely to engender subordinates' satisfaction, motivation and inspiration and will encourage them to be present in their workplace whenever possible. Leader communication tactics are effective management tools in the reduction of discretionary absenteeism. Self-management training and goal setting have both been recognised in studies as feasible interventions. And leader initiated feedback on absenteeism behaviours of followers showed promise in the same vein (Frayne & Latham, 1987; Gaudine & Saks, 2001; Unckless et al., 1998). Good leaders pursue their purpose with passion, practicing solid values, leading with heart, establishing enduring relationships and demonstrating self-discipline. The effective leader reinforces subordinate behaviour that leads to achieving organizational goals, and punishes the subordinate for behaviour that does not achieve such goals. Whilst t is clear that the leadership style largely influences staffs' will and want for coming to work, it must not be forgotten that it also needs to be adapted not only to each individual but also to the situation or objective at hand. The situational leadership model is a very effective way to ensure staff satisfaction which is likely to reduce absenteeism. Indeed providing the right level of support or direction at the right time for the right task will make employees feel valued, resulting in a mutual trustful relationship between employer and employee. All members of an organisation directly managing staff, may they be first-line managers or executives on the company board, should follow a leadership style. ...read more.