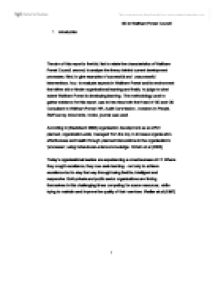 1. Introduction The aim of this report is fivefold, first to relate the characteristics of Waltham Forest Council, second, to analyse the theory behind current development processes, third, to give examples of successful and unsuccessful interventions, four, to evaluate aspects in Waltham Forest and its environment that either aid or hinder organisational learning and finally to judge to what extent Waltham Forest is developing learning. The methodology used to gather evidence for this report, was to interview both the Head of OD and OD Consultant in Waltham Forest. HR, Audit Commission, Investors in People, Staff survey documents, books, journal was used. According to (Beckhard 2006) organisation development as an effort planned, organization-wide, managed from the top, to increase organisation effectiveness and health through planned interventions in the organisation's 'processes', using behavioural-science knowledge. Schein et al (2006) Today's organisational leaders are experiencing a consciousness shift. Where they sought excellence, they now seek learning - not only to achieve excellence but to stay that way through being flexible, intelligent and responsive. Both private and public sector organisations are finding themselves in this challenging times competing for scarce resources, while trying to maintain and improve the quality of their services. Pedler et al (1997) 2. Overview of Waltham Forest Waltham Forest Council is a Labour led local authority responsible for providing public services and political leadership within the Waltham Forest. It is situated in the northeast of London, with a population of 225,000 and it was formed in 1965. ...read more.

Working with diverse groups of people requires a tremendous amount of interaction. If these interactions are positive, they can help create the right workplace climate, attitudes, beliefs and behaviours. Roper (2005) 3.2 Education, Training and Techno-Structural activities "(Burgoyne, 1988) Suggested that organisations are likely to function as learning companies, if their HR team makes a critical input to the company's strategic opportunities based on their reading of the cumulative abilities, potentials and vision of staff alongside other departmental colleagues. A management development perspective not only makes inputs to corporate policy, but also illuminates the policy forming process." Pedler et al (1997) As mentioned earlier Waltham Forest implemented Performance Management and Development System in 2003. The overall aim of PMDS is to encourage a reorientation of service delivery towards customers and produce a quality driven organisation. "As Victor Vroom expectancy theory assumes that human behaviour is goal -directed and that work will be more motivating when it provides the opportunity for goal attainment and needs satisfaction." Pinnington et al (2000) Corporate training programme was brought in 2004 to train the managerial level throughout the council. As suggested by (Cummings 2009) the issue of who should lead team-building session is a function of managerial capability. The PMDS has been a key element of staff management within the council for several years. It is seen by management as significantly important tool in ensuring that staff has clear objectives of both their work and developmental needs. ...read more.

Although initially welcome by staff and proving positive with result, the velocity of the transformation in the past year is now proving disruptive to say the least. Also, the council has for now cut funding for training due to budgetary constraint. Social housing reforms perhaps could cause shrinkage to subordinate services. The adoption of technology in delivering services has led to some opposition from within the council and as well as from the unions. 6. Critically evaluate to what extent Waltham Forest is developing The many OD interventions has transformed poor performance management, non-existent staff consultation, and loose departmental and multi agency collaboration to a more rigorous PMDS culture and built a collaborative group working ethic, thus aiding Waltham Forest strategic mission. OD team working interventions generally bring about positive outcomes as stated by (west et al 2004) but critics (Allen and Hecht 2004) have stated there is no empirical evidence of the effectiveness of team. It is also generally argued by experts that OD success is susceptible in some cases to receivers' attitude and value, because not all individuals are alike. Although some of OD interventions might not apply certain settings, but in the context of Waltham Forest operations collaborative team working and learning is crucial if not critical. 7. Conclusion There is the undeniable recognition that employees form the lifeblood of any organisation. It is essential that organisations put effective performance management alongside their organisational learning strategy. According to (Senge 1994) organisational learning would take place when organisations gear up their human resources to exhibit self-mastery, shared mental models, shared vision, team learning and system thinking. 8. ...read more.