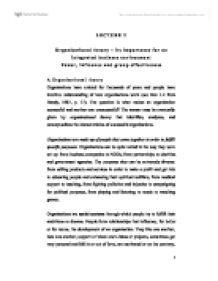 LECTURE 2 Organisational theory - its importance for an integrated business environment Power, influence and group effectiveness A. Organisational theory Organizations have existed for thousands of years and people have intuitive understanding of how organizations work (see Box 1.2 from Handy, 1987, p. 17). The question is what makes an organization successful and another one unsuccessful? The answer may be eventually given by organizational theory that identifies, analyzes, and conceptualizes the characteristics of successful organizations. Organisations are made up of people that come together in order to fulfill specific purposes. Organizations can be quite varied in the way they were set up: from business companies to NGOs, from partnerships to charities and government agencies. The purposes also can be extremely diverse: from selling products and services in order to make a profit and get rich to educating people and enhancing their spiritual wellfare, from medical support to teaching, from fighting pollution and injustice to campaigning for political purposes, from playing and listening to music to watching games. ...read more.

Decision-makers may also be influenced by their past. Power - the ability to get other people to do what you want even if it's not something that they would otherwise have done. Power, politics and rationality The interplay of power and politics can result in strategic decisions that seem irrational to an outside observer. Such decisions may, however, make perfect sense to people who are conditioned to the way in which the organisation sees the world. Bounded rationality - is a reasoning process which is not free, but shaped or determined - bounded - by factors which make particular ways of thinking about problems much more likely than others. These factors may be preconceptions, or lack of time, information or motivation to take a better decision. Most organisations acquire a set of values and assumptions about the world, their industry and their organisation that become more homogeneous over time. This set of deeply held, often unspoken beliefs is known as the organisation's dominant logic or paradigm or sometimes its theory-in use or organisational code. ...read more.

the analytical task of a manager which consists of: "To identify the key variables in any situation; To predict the probable outcomes of any changes in the variables; To select the ones he can and should influence." (Handy, 1987, p.17) No matter what the result of such an analysis is, the knowledge of what you can do, but also of what you cannot do, is very important. Individuals, as well as organizations, progress by both knowing what not to do in certain moments and recognizing what must be done. The importance of such knowledge, as well as its limitations for detailed, practical advice on how to behave in a particular situation, is underlined by Handy in the following fragments of his book: 1 It is a belief that developed with the extraordinary advances of science and technology. In Romania this belief was deepened by the communist regime: first as a natural representation of the successes of the "new order" and second by the almost total lack of religious education particularly for the young generations. 1 ...read more.