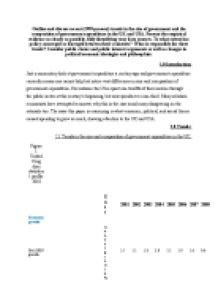 Outline and discuss recent (1999-present) trends in the size of government and the composition of government expenditure in the UK and USA.

﻿Outline and discuss recent (1999-present) trends in the size of government and the composition of government expenditure in the UK and USA. Present the empirical evidence as clearly as possible, fully identifying your data sources. To what extent has policy converged or diverged between these countries? What is responsible for these trends? Consider public choice and public interest arguments as well as changes in political/economic ideologies and philosophies. 1.0 Introduction: Just a momentary look at government expenditure a century ago and government expenditure currently means one cannot help but notice vast differences in size and composition of government expenditure. For instance the USA spent one twelfth of their income through the public sector at this century?s beginning, but now spends over one-third. Many scholars, economists have attempted to answer why this is the case amid many disagreeing on the rationale too. The issue this paper is examining is what economic, political, and social forces caused spending to grow so much, drawing attention to the UK and USA. 2.0 Trends: 2.1 Trends in the size and composition of government expenditure in the UK: Figure 1: United Kingdom statistical profile 2010 Unit 2001 2002 2003 2004 2005 2006 2007 2008 Economic growth Real GDP growth Annual growth % 2.5 2.1 2.8 3.0 2.2 2.9 2.6 0.6 Net saving rate in household disposable income % 1.5 -0.1 0.4 -1.7 -1.3 -2.9 -4.3 -4.5 Gross fixed capital formation % of GDP 16.8 16.8 16.4 16.7 16.7 17.1 17.8 16.8 Government deficits and debt Government deficit % of GDP 0.6 -2.0 -3.7 -3.6 -3.3 -2.7 -2.7 -5.3 General government debt % ...read more.

So whether the existence of interest groups leads to greater government expenditure is still debatable. David R Cameron, (1978), gives five explanations of the expansion of the public economy[6]: Economic: A key reason for the increase in the scope of the public economy is derived from Wagner's ?law of expanding state activity? (1883). The law states that the ?pressure for social progress leads inevitably to the growth of the public sector?. Cameron also notes Wagner?s consideration of the state?s growing role as a ?provider of social overhead investments in such areas as transportation and education and the need, even in an authoritarian state, for the state to retain legitimacy by providing public funds to compensate for the human costs of economic development?. In addition Wagner's law implies that citizen's demands for services are sure to increase when economic affluence increases because taxes are income-elastic. If this is the case then we would anticipate that the greater the increase in economic affluence of a country during a specified period, the greater should be the expansion of the public economy. However Cameron is conscious of the opposition and rejection by several scholars of Wagner?s law including Bird (1971), Musgrave (1969), and Gupta (1968) as they discovered that ?any positive cross-national relationship between economic growth and government share in the economic product disappears when analysis is confined to the wealthier nations of the world? and this paper is analysing two wealthy countries. Fiscal: Making use of Downs, (1960) and Buchanan and Wagner, (1977), their perception is to do with the ?structure of the system of revenue generation as a determinant of how much revenue can be raised?. ...read more.

has put forward the idea that because the government sector is largely a ?service industry with relatively low capital-labour intensities?, productivity rises are expected to be smaller in comparison to those in the manufacturing and primary sectors.[12] Spann?s survey (1977a, 1977b) agreed, Bradford, Malt and Oates (1969) also confirmed this. 4.0 Conclusion: ?The size of government, both absolutely and as a percentage of GNP has in the last decade reached unprecedently high levels in all Western countries? (Nutter 19878).[13] Many economists have disagreed with the thought that the growth of spending was caused by inevitable forces such as Wagner?s law and Baumol?s disease. But that it was nothing but a response to changing perceptions about what governments should do hence why the size of government expenditure may have increased is because it now has to fulfil more jobs. Furthermore the growth of government may reflect ?a lack of confidence in the private sector?s ability to deal with some problems and a belief that public spending was the best way to deal with several risks faced by individuals?.[14] Therefore public expenditure in addition to its growth has changed its composition towards more social objectives. ?Expenditure on health, education, pensions and unemployment compensation has been justified by reference to the market?s failures both to guarantee outcomes that meet society?s equity objectives and to any of the possible causes of market inefficiency?.[15] Many rationales have been put forward to answer why the size and composition of government expenditure has changed and several seem very plausible. ...read more.