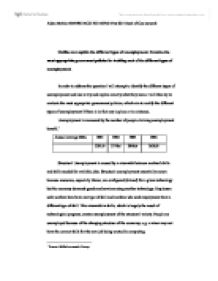 The Unit published a major report "National Strategy for Neighbourhood Renewal" in April 2000. The Social Exclusion Unit has defined social exclusion as: - "A shorthand term for what can happen when people or areas suffer from a combination of linked problems such as unemployment, poor skills, low incomes, poor housing, high crime environments, bad health and family breakdown". 2The European Social Fund Objective 3 programme in Great Britain will support Government policies and programmes, identified in the National Action Plan for Employment, to tackle the problems of worklessness, inadequate qualifications and social exclusion in a coherent way. In particular, Objective 3 will support national approaches to: - Welfare reform; - Active labour market measures for unemployed people; - Lifelong learning; and - Adaptability and entrepreneurship. This support will be structured on the basis of the five priority fields laid down by the Regulation setting up the European Social Fund for 2000-2006. The European Employment Strategy provides the framework for an increasing emphasis on employment across the European Union, and intensifying co-operation between Member States in order to fight unemployment and promote employability. The annual Employment Guidelines form the basis of Member States' employment policies, as set out in their national employment action plans, and the UK's National Employment Action Plan (NAP) ...read more.

Residual unemployment will always exist for one reason or another. Reason being if someone is disabled and unable to work then this will be the case for the rest of his or her life. However, those who would rather claim unemployment benefit than work need to be encouraged to get back to work. Schemes like New Deal and Job Link undoubtedly help those to get back in the workplace. There are however, people who both work and also claim unemployment benefit. This is a major drain on government resources. The government also needs to tackle this problem as well as the problem of unemployment. The government needs to encourage these people to go back to work by either using remuneration benefits or withdrawing remuneration benefits. Cyclical unemployment could perhaps be tackled by exploring new industries or by making the particular industries, which are in poor demand more attractive in order to create more interest and jobs. In conclusion to the question it could be said that there are different types of unemployment, which include; * Structural * Seasonal * Frictional * Residual * Cyclical The government has introduced different policies with the help of the EU in order to attempt to rectify the different types of unemployment. ...read more.