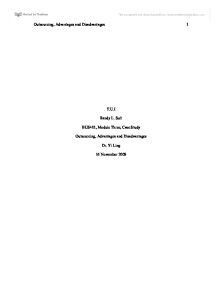 T.U.I Randy L. Sult BUS401, Module Three, Case Study Outsourcing, Advantages and Disadvantages Dr. Yi Ling 16 November 2009 What is outsourcing? When a multinational company subcontracts services, shifts resources to another company outside its boundaries, it is considered to be outsourcing. Increasingly, in today's business environment outsourcing is in the spotlight and heavily debated about. Some say its desirable and others feel that it's undesirable. There are tens of thousands of articles on this topic and many personal stories have been written. Congress and State governments have tried to stop it or gain political points by saying they are against it. "Yet much of this discussion is beside the point. ...read more.

At the state level, legislatures in Maryland, Washington, Connecticut, Missouri, and New Jersey are considering laws banning outsourcing of government tech-services contracts to low-wage developing countries. Even if they don't pass, though, they might make a U.S. company think twice before outsourcing more work to India and elsewhere." (Manjeet Kripalani and Bruce Einhorn in Bangalore, 2003) Expertise and experience is another factor in the decision to outsource. When a multinational company is looking for specific skill sets, production methods and trained staff, it chooses to outsource to companies who can take on the responsibility. And it works both ways. "As they expand into the higher-end tech-consulting business, India's top three IT companies, Wipro, Tata Consultancy Services, and Infosys, are hiring more U.S.-based marketing and consulting executives." ...read more.

Another disadvantage is the decline of wage rates. The competition for jobs increases and local employers are able to drop the wages due to supply and demand. This can also affect the local and national economies due to the declination of consumer spending, less taxes paid, and more government programs being taken advantage of. It is important to remember that as the global economy continues to grow and integrate further, outsourcing is a reality of business that is here to stay. The biggest negative impact of this will continue to be on the human capital. Continued education of the workforce and skill development is the key to success as America competes for the best paying jobs in the world. Outsourcing has many advantages and disadvantages as discussed, and it will continue to be a topic that will be debated far into the future. ...read more.