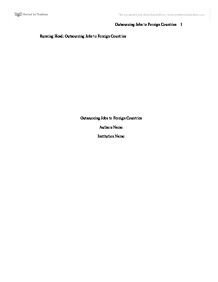 Running Head: Outsourcing Jobs to Foreign Countries Outsourcing Jobs to Foreign Countries Authors Name Institution Name Introduction Outsourcing has become a popular practice amongst many competitive manufacturers. In other words, outsourcing has been measured one of the major factors contributing to a company's competitive advantage. The chief vehicle to achieve outsourcing is subtracting agreements. *A recent report which reviewed three hundred company technology-decision makers pointed out that just twenty eight percent of associations suppose that IT outsourcing can offer major cost savings. In addition, the study discovered numerous fundamental concerns in the minds of possible outsourcers. Over half of respondents pointed out that a defeat of internal knowledge was a major drawback of outsourcing, while another forty-one percent designated that lower service quality was a main concern. Potentially the most worrying statistic for outsourcing companies is the fact that such concerns were considerably lower merely two years ago when only twenty-three percent pointed out service quality as a major drawback. While this survey appears to some extent of an outlier statistically, it does agree with the recent inclination seen in many large companies who are getting IT work back in-house. Such news elevates more questions concerning the sustainability of outsourcing and its long-standing effects on business.* I have included this paragraph to the paper as I feel this makes my argument on the topic more persuading and stronger. Major international companies outsource their labor. Global competitors such as Nike and Timberland utilize outsourcing in their operations. ...read more.

Textile workers in industrialized countries have fought hammer and tongs for protection against "unfair" low-cost foreign competition. They have been losing this battle for years, as labor rates and productivity cannot keep pace with those of Asian textile workers. Japan has worried about the hollowing of its manufacturing industries as companies move more and more labor-intensive tasks offshore. (Michael L. Dertouzos, 1997) Over the past fifty years, another thoughtful change has taken place in international trade. For centuries, trade had been in goods natural resources (e.g., coal, timber, oil, minerals) and products made in one country that had markets in others. simply two centuries ago international trade was predominantly barter my glass beads for your tobacco. Analysts said it makes sense that more banking companies and large thrifts would aggressively explore foreign outsourcing, despite having little or no foreign operations. Some analysts predicted that such companies would lead the next wave of offshoring as a way of containing expenses (Davis, Paul and Cole, Jim, 2006). As Dani Rodrik noted in "Sense and Nonsense in the Globalization Debate," "If [the flight to low wages were the principal driver of outsourcing], the world's most formidable exporters would be Bangladesh and a smattering of African countries." And as companies consider how to become (and remain) the best in every area of business, they must look globally for capabilities. Acquiring a low-cost plant in Mexico may be attractive in the short term, but unless that plant keeps up with, or exceeds, world standards in cost, quality, reliability, and customer service, the parent company's advantage will be short-lived. ...read more.

can be easily selected. However, if a company chooses to outsource the manufacturing of a part used in its products based solely on an external supplier's price being lower than internal production costs. The supplier's performance in other criterion can result in the true cost being greater. For example, if the supplier of the outsourced parts delivers poor-quality products, the outsourcing company will incur expense by either having to rework the items to correct the troubles or delay production until the supplier offers acceptable replacement parts. Also, if the supplier delivers the parts late, the company may have to setback completion and delivery of the end products to the customer base, impacting cash flow and sales revenues. In addition to the financial impact, the company's customers will be disgruntled because of the delays in receiving the products they purchased. If the external supplier is not preceding the manufacturing processes used to produce the parts, production methods in use could become outdated and not competitive. Furthermore, if the supplier provides the company with poor customer service (for example, not being receptive to the company's request for scheduling information needed to support its internal operations), again delivery of its products to the customers could be delayed. For these reasons, sourcing decisions require to be made considering the overall performance of each available source, whether an internal department or an external supplier, in all five performance criterion that determine the company's competitiveness: quality, delivery, customer service, and product advancements, as well as cost. ...read more.