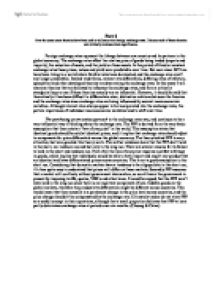 Over the years some theories have been said to influence the foreign exchange rates - Discuss each of these theories and critically evaluate their significance.

The internal equilibrium assumes that full employment prevails, and that if unemployment exists it's such that it won't affect real wages. The external equilibrium refers to the balance of payments. This theory is quite unique, since it can explain permanent deviations in the PPP. However, there are some problems with this idea, since it is extremely difficult to assess what the exact natural rate of unemployment is. The exchange rate consistent with equilibrium in the external accounts tends also be very difficult to determine. The balance of payment approach will determine where the exchange rate has to converge to, but it provides very little guidance to the short-term fluctuations. The monetary and portfolio approaches are asset-pricing views of the exchange rates. The idea is that agents have a portfolio choice decision between domestic and foreign assets. These instruments, either money or bonds, have an expected return that could be arbitraged. It is this arbitrage opportunity that determines the process of the exchange rates. In its simplest form, the theory implies the interest rate parity, where the idea is that if the expected depreciation does not compensates the interest rate differentials, agents would have arbitrage opportunities. The theory itself is very attractive but it just works extremely bad according to the data. ...read more.

Finally I would like to take a look at the effect of news. The idea that news causes the great bulk of movements in exchange rates has a long history. Empirical attempts to associate exchange rate movements to specific announcements of macroeconomic variables have been impeded by the difficulty in extracting the unexpected component in these announcements. But several sources show that in fact the response of the exchange rates to news is extremely rapid, on the order of minutes. In some cases the full adjustment of the exchange rate has take as little as 10 seconds. Even minute-by-minute data might not be able to capture this news effect. It's extremely difficult to predict the effect of news since the effects will most likely be unexpected. The real world is characterized by unpredictable shocks and surprises. The conclusion I have come to after analyzing these different types of macroeconomic theories, is that most of them if not all have extremely difficult to influence the exchange rate in the short run. Even though one would be able to predict money supplies, government policies and other economic influences it would still not be enough to forecast exchange rates. In the short run many economists find the best solution to predict the exchange rate is that whatever will happen will happen today. The theories I have covered are clearly relevant in explaining the patterns of exchange rate behavior, but as we have seen they are very limited for predicting exchange rates. ...read more.