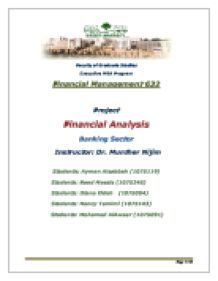 Jordanian Banking sector Background & Economic Indicators for 2007 The banking sector plays a major role in the Jordanian economy, as it lies in the heart of the financial system and dominates it. According to the Department of Statistics (DoS), the finance, insurance, real estate and business services sector was the largest contributor to GDP growth in 2007, representing 1.5% of the overall 6% increase. The sector comprises 23 banks, of which 15 are listed on the ASE, representing 54% of the bourse's total market capitalization. By the end of 2007, total assets of listed banks reached JD44,221.295 million, of which direct credit facilities were approximately JD 21,239.689 million. Situated in a region that officially received a high risk assessment by the Heritage Foundation & The Wall Street Journal , the Jordanian banking sector currently faces many challenges, Jordan scored 60% in the Financial Freedom category, while the economy's overall ranking placed Jordan 5th out of 17 on a regional basis. Nevertheless, Jordan's small but promising economy continues to offer improving opportunities for the banking sector, which has faced many developments in recent years, as the Central Bank of Jordan (CBJ) has been pushing to bring its regulatory and supervisory standards into line with international standards. As of January 2008, the CBJ's guidelines for the establishment and operation of commercial and Islamic banks are in compliance with Basel II requirements. The CBJ has been regulating the banking sector's code of conduct since 1964. In 2003, CBJ decided to increase the minimum capital requirement for local banks from JD 20 million to JD 40 million by the end of 2007. The adequate capital of JD 40 million was set with an ultimate objective to reach JD 100 million by 2010. Currently, there are 8 listed Jordanian banks which do not yet meet the JD 100 million paid up capital requirement. The increase in required capital was set so that banks would always be ready to meet up to their obligations and insure capital adequacy. ...read more.