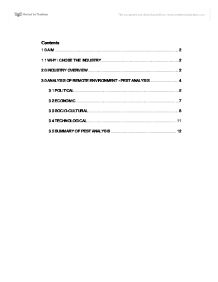 Contents 1.0 AIM 2 1.1 WHY I CHOSE THE INDUSTRY 3 2.0 INDUSTRY OVERVIEW 3 3.0 ANALYSIS OF REMOTE ENVIRONMENT - PEST ANALYSIS 5 3.1 POLITICAL 5 3.2 ECONOMIC 8 3.3 SOCIO-CULTURAL 9 3.4 TECHNOLOGICAL 11 3.5 SUMMARY OF PEST ANALYSIS 13 PEST ANALYSIS OF THE MOBILE PHONE NETWORK OPERATORS INDUSTRY IN THE UK 1.0 AIM This paper presents an investigation into the UK mobile phone network operator industry. The report examines the external and internal environment of the industry in order to ascertain how attractive in terms of competition and profitability, the industry is for business. Significant operating factors affecting the industry are identified and analysed. Using PEST an insight into the industry's remote and operating environment is provided. The report will take into consideration the following; * The industry background, size, recent developments, growth and trend of the industry * The major competitors/strategic business group within the industry. * Analysis of the remote environment by identifying significant factors (Political/Legal, Economical, Socio-Cultural, and Technological) affecting the industry. 1.1 WHY I CHOSE THE INDUSTRY There has been an increased significance of mobile phones in our everyday lives, and I as a person have developed a great deal of interest in mobile phones and their technology. At the start of this project, I was indecisive about what industry to choose between the mobile phone manufacturers and the service providers. I however chose the service providers as I discovered I had access to more information regarding mobile phone network providers. 2.0 INDUSTRY OVERVIEW Firstly, I would like to define mobile network operators (MNOs) as telecommunications companies that obtain licenses from the government to operate and provide mobile phone services for their subscribers. This should not be confused or mixed with Mobile Virtual Network Providers (MVNOs) who do not obtain licenses, but provide services to subscribers by utilizing spare capacity on the MNOs spectrum. Both MNOs and MVNOs are a sub-category of the Telecommunications industry. ...read more.

This charge is pushed on to the consumer who eventually pays. In the past, these rates have been high and variable amongst different MNOs as well as a high source of revenue for MNOs. MNOs attributed the high and variable rates to factors such as costs for infrastructure. The European Commission (EC) however expressed concerns about what it considered unjustifiable rates and therefore called for charges to be slashed14. Ofcom on the 6th of April 2009 directed that rates be reduced by 21%, and a further reduction to follow in 2010 with an aim to equalise all rates15. 3.14 Base Stations & Human Health; member of the general public as well as interest groups such as Powerwatch and Friends of the Earth Scotland have shown concern about impact of radiations from base stations, transmitters and mobile phones on human health. According to the mobile operations association (MOA), all mobile phone base stations in use in the UK, comply with the international health and safety public exposure guidelines recommended by the International Commission on Non-Ionizing Radiation Protection. It also states that over 30 scientific researches has been conducted and results have shown no negative correlation between mobile phone base stations which comply with the international health and safety guidelines and human health16,17. 3.2 ECONOMIC 3.21 Impact of the Credit Crunch; the personal disposable income of consumers is to a large extent determined by the availability of credit and the economic condition. With the current economic and financial situation which has resulted in a general contraction of consumers' spending ability, several industries have watched their revenues plummet. Businesses in general are experiencing difficulty in obtaining loans from banks for major investments and expansions due to the unavailability of credit and tighter credit conditions. Analysis by Ovum (a global advisory and reporting firm) has revealed that the mobile network operators' revenue has not been impinged on by the credit crunch. ...read more.

Operators will benefit from the price drop as they would be able to integrate wireless technology into a wide range of devices34. 3.43 DISINTERMEDIATION; The innovation of 3G and convergence has brought about the emergence of third party content providers, typically frowned upon by network operators34. These third party companies such as application stores by-pass the network operators to provide various applications to phone users. It has been forecasted that the number of downloads sourced from third party companies is set to increase to 10 billion in 2009. Network operators do not earn any direct revenue from downloading applications from third party companies and the subject of intermediation will continue to cause concern34. On the other hand this has presented an opportunity for operators as they can launch their own application store. Vodafone revealed plans in May 2009 to launch its own application store. 3.5 SUMMARY OF PEST ANALYSIS In terms of the political analysis, a key finding is that the MNO industry is extremely regulated in order to ensure competition, avoid market monopoly and protect consumers. Despite the several already enforced laws such as mobile termination rates cuts and slashed roaming charges which have adversely affected revenues, the MNO industry is likely to face further regulations from the EU and other regulatory bodies in the future. In relation to the current economic climate, it seems to me that despite the fact that operators may see a decline in their revenues; the industry will prevail over falling personal disposable income, reduced spending power and the like, for the one reason that mobile phones have become a thing of necessity. Also, with persistent trends such as the need for communication, mobile phones remain indispensable for majority of the population and the industry may continue to thrive in face of the challenging economical climate. Technological innovation will continue to be the driving force of the industry. For this reason, I recommend that operators should pay more attention to investments in research and development as it is fundamental to the innovation of new technologies. ...read more.