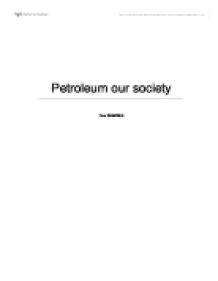 petroleum in our society

Petroleum our society Year 2008/2009 Introduction http://fr.wikipedia.org/wiki/Petrole According to Collins dictionary, petroleum (from Latin 'petrous': rock, stone + 'oleum': oil) is a dark-coloured thick flammable crude oil occurring in sedimentary rocks, consisting mainly of hydrocarbons: the source of petrol and paraffin. Petroleum is not a recent discovery, it would has been discovered more than four thousand years ago. But it is only between 1859 and 1901 that the industry was born. Indeed, the American Edwin Drake is behind the birth of oil industry and this year, USA produced 274 tonnes of petroleum. We can separate the history of petroleum in six eras. The first one is during the discovery of oil, it was a 'black gold rush' in different areas in the world: California, Poland, Azerbaijan etc. The wells are not very several and the production is low, as one barrel per day Between 1901 and 1945, the production has increased thanks to the progress of techniques of oil exploration. It was so huge that the only problem at this time was how to sell it off. During the two world wars, petroleum was at big stake. USA represented 60% of the global production. After the Second World War, because of the high growth known by the developed countries, the consumption has increased: multiplied by three in 20 years. In 1960, the biggest producers create the OPEC (Organization of the Petroleum Exporting Countries) to coordinate the members' interests. After 1973, there is one oil crisis after the other. ...read more.

Nowadays, to respond to the issue how to replace oil in the future years, scientists thought about the biofuels which are made from renewable resources, as plant biomass or vegetable oils and treated municipal or industrial wastes. At first sight, it is a good substitute to petroleum. Made from natural resources, the shortage risk is low. Nevertheless, it exists some bad points for this alternative. Let us talk about the impact of the environment. First of all, to farm the land for fuel production leads the land clearing (cf Amazonian forest). And without a doubt, there are no really savings about carbon dioxide emissions. In effect, the biofuels do not emit necessarily less CO2; it depends on what the land was previously used for. The greatest threat here is global warming. In any case, for US which is a big consumer (and also a big producer) of oil, if they convert all their maize production it definitely won't be enough to satisfy all the demand. And yet, US is a very big country with a huge cultivated area. At economic and social levels, the direct effect is the increasing of food prices and in the same way, the decrease of access to the neediest populations to food, for example in Africa. To illustrate with another example, in France which is a great product country, the cost of vegetables or even wine would go up. Finally the solution is not to leave the biofuels, but just to develop and use them in the right way. ...read more.

or "How do you imagine your future without oil?", "Do you realise this resource is disappearing?" or "For how long do you estimate the reserves?" etc. My aim is to estimate their degree of awareness. I would prefer to investigate the average young people (up to 25 years old) because I consider them like the ones who can influence the future behaviours. The using of a questionnaire to fill in by my colleagues at university would be a good way to collect enough data about awareness of people. Later, when I'll explain them everything known in 2008, I imagine a group interview. The aim of this collective discussion will be to pay attention to the suggestions, how they think they can manage to solve this problem. Qualitative data because I think I have to compare the quality of biofuels and ones of classic oil. I will find this information through research made by experts. It would be interesting to know more about the effects of producing this alternative to petroleum, if it is not a long-term danger for environment or a social issue (i.e. problem of agriculture). About the actions of the governments in the whole world I was thinking about looking for some reports, meetings, and statements of Parliament. In these documents, I hope finding all the pieces of information I need to conclude on their actions and to make sure that authorities are conscious of the reality of this problem. To link this issue to the war in Iraq for example, I could look at the historic of this country to understand better why US was interested by setting up there. ...read more.