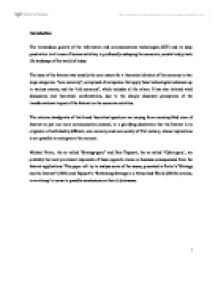 Porter and Tapscott Polemics - Are there new business objectives and methods to achieve them?

Introduction The tremendous growth of the information and communications technologies (ICT) and its deep penetration in all areas of human activities, is profoundly reshaping the economic, societal and private life landscape of the world of today. The issue of the Internet was actually the core reason for a theoretical division of the economy in two large categories: "new economy", comprised of companies that apply these technological advances up to various extents, and the "old economy", which includes all the others. It has also initiated vivid discussions and theoretical confrontations, due to the sharply dissonant perceptions of the transformational impact of the Internet on the economic activities. The extreme standpoints of this broad theoretical spectrum are varying from oversimplified view of Internet as just one more communication channel, to a glorifying declaration that the Internet is an originator of unthinkably different, new economy and new society of 21st century, whose implications is not possible to anticipate at the moment. Michael Porter, the so called "Strategy-guru" and Don Tapscott, the so called "Cyber-guru', are probably the most prominent exponents of these opposite views on business consequences from the Internet applications. This paper will try to analyse some of the issues, presented in Porter's "Strategy and the Internet" (2001) and Tapscott's "Rethinking Strategy in a Networked World (2001b) articles, in an attempt to come to possible conclusions on their (ir)relevance. PORTER AND TAPSCOTT POLEMICS Are there new business objectives and methods to achieve them? Porter calls for a "return to fundamentals", stressing that there is only one arbiter of the business success: the true economic value, which is "reliably measured only by sustained profitability" (p.65). The only way to be more profitable than the average competitor is "by achieving a sustainable competitive advantage - by operating at a lower cost, by commanding a premium price, or by doing both" (p.70). Tapscott completely agrees with these statements. ...read more.

Dent suggests that the increase of volume, speed and quality of business interactions will ultimately lead to a situation when "the needs, wants and expectations of shareholders, customers, employees, suppliers and regulators will become an integrated whole" (p.4). Sammut-Bonnici and McGee (2002) write that the "increasing importance of connectivity and modularity is forcing a shift form competitive mode towards cooperative mode". This radical shift towards cooperation triggers the question of whether we should soon expect a "Theory of cooperative forces"? Boulton et. al. (2000), introduced a completely new view of value creation called "Value Dynamics", based on the primary principle that "businesses are their assets - all of them". The authors claim that, beside the traditional physical and financial assets, it is the intangible assets such as people, brands, technology, knowledge and relationships that create value in the new economy. Thus, they add three new asset categories: employee and suppler assets (employees, suppliers and partners), customer assets (the end-users, company's distribution channels and affiliates) and organisation assets (leadership, strategy, culture and value, knowledge etc.). According to them, businesses learn to design business models to create value by using assets in all five categories. For instance, America Online, with virtually no physical assets, has largely used customer assets to create value. Similarly, authors consider the suppliers and partners as parts of the extended enterprise and "increasingly critical sources of value". Furthermore, "in the new economy, the ability and skill to partner and / or ally" might even become central to a business success. Chrysler case is quite enlightening in this regard: the company is outsourcing major parts and subsystems to individual suppliers on the basis on long-term contracts. The suppliers are included in cost-cutting discussions and technological development, and they share the financial benefits. This strategy, which is an obvious example of using supplier assets, has increased company profit by hundreds of millions of dollars annually. ...read more.

The ICT and the knowledge economy are so closely interrelated that one could argue that without the advent of ICT, the economy of today would have been still functioning in ways not much different than few decades ago. On the other hand, the knowledge economy strongly stimulates the future ICT advances. When considering the knowledge as a source of value, probably the most proper approach would be to understand the value in a much broader sense than purely economic one. Finally, every business is an organic part of the broader system - continuously influencing and being influenced by the values created in the other parts of the community. CONCLUSION Several conclusions could be derived from the presented discussion: the business fundamentals have not (yet) changed: companies are in business to make money; in order to be successful, the companies must achieve sustainable competitive advantage; the ways of achieving competitive advantage are ongoing radical changes, most notably trough the continuous invention of new business models that increasingly often prove to work in practice; knowledge is a new source of value that is rapidly gaining the significance of the most valuable and maybe even the only valuable source of value; the transformational power of knowledge transcends the frontiers of business community: it reshapes all spheres of the society, often in ways that are not possible to predict; the phenomena of new business models and knowledge as a source of value would not be possible by adequately developed information technology and, finally, the Net as ubiquitous connection infrastructure. Yet, some of these conclusions are being subject to many vigorous disputes. A fully valid judgement of their relevance is certainly beyond the reach of this paper. We could only say that the Net holds an unspoken promise to take us to the world that we never knew before. Whether this world will be a better one will probably be one of the most important decision in the human history. A decision than will be taken by virtually everyone on this planet. ...read more.