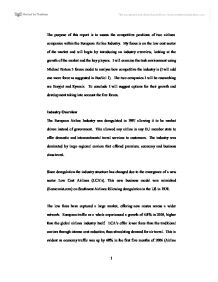 The purpose of this report is to assess the competitive positions of two airlines companies within the European Airline Industry. My focus is on the low cost sector of the market and will begin by introducing an industry overview, looking at the growth of the market and the key players. I will examine the task environment using Michael Porters 5 forces model to analyse how competitive the industry is (I will add one more force as suggested in BusVol 1). The two companies I will be researching are Easyjet and Ryanair. To conclude I will suggest options for their growth and development taking into account the five forces. Industry Overview The European Airline Industry was deregulated in 1997 allowing it to be market driven instead of government. This allowed any airline in any EU member state to offer domestic and intercontinental travel services to customers. The industry was dominated by large regional carriers that offered premium, economy and business class travel. Since deregulation the industry structure has changed due to the emergence of a new sector Low Cost Airlines (LCA's). This new business model was mimicked (Economist.com) on Southwest Airlines following deregulation in the US in 1978. The low fares have captured a large market, offering new routes across a wider network. ...read more.

The airline has a break even load factor and anything above that is profit. The low cost sector has little product differentiation indicating that competition is intense as the airlines are offering more or less the same product. The winner is basically the one who can capture the most passengers. Exit barriers in the airline industry are high due to high fixed costs. Although there is asset specificity, an airplane cannot be used for other purposes, however, it is mobile. Markets in other European countries are opening up with the widening of the EU adding another 12 countries into the European aviation market, giving scope to a wider network. 6. Relative Power of other Stakeholders Government Legislation may cause a barrier of entry or increased fares. Within the airline industry the EU is proposing an Emissions Trading Scheme (ETS). This scheme (Airline Business, Vol. 22) takes into consideration the environmental impact aviation has on the environment. It is set to propose a Kerosene tax on all domestic and intra EU flights. This will push costs up for the airlines thus reducing revenue and profits. This could have a great impact on LCA's as they are price sensitive. This could push up fare prices (elfaa) as much as 8%, which in turn may reduce demand by 12 %. ...read more.

Bad publicity for customer service is a key issue; this could have an adverse effect as now there are many airlines covering the same routes giving more choice to customers. Gaining market share on the profitable routes is a major key to success, which both companies are aiming for through increasing their capacity and expanding networks by setting up bases across Europe and acquiring more aircraft. Size and market share are critical for a long-term success which both airlines have achieved. Acquisitions and differentiation are the way forward for both companies deterring further competition as the market will become saturated. The traditional carriers such as BA are now implementing new strategies, cheap flights to gain passenger traffic. It is important that EJ and Ryanair keep their fixed costs low and hedge their variable costs to ensure they can continue to offer low fares. Appendix Financial and statistical data Easyjet Market Capitalization �1.8billion (current stock price times the number of outstanding shares) Net Profit 2006 �94.1m 2005 �59m Net Margin 3% Cash and cash equivalents �861,000,000 Return on Equity 10.1% up from 7.1% in 2005 Unit costs reduction of 1.5% Passenger numbers 33 million (year end Sept 2006) Ryanair Market Capitalization �3.8billion (msn money) Net Profit �302million rising 12% from 2005 �204,000,000(currency converter) Net Margin 18% Cash and cash equivalents �1,439,004,000 �907,000,000(currency converter) Return on equity 19.10% Unit cost reduction of 6% Passenger numbers 34. ...read more.