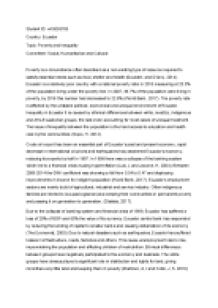 Poverty and Inequality in Ecuador

Transfer-Encoding: chunked ﻿Student ID: w15005765 Country: Ecuador Topic: Poverty and Inequality Committee: Social, Humanitarian and Cultural Poverty is a circumstance often described as a non-existing type of resource required to satisfy essential needs such as food, shelter and health (Goulden. and D?Arcy. 2014). Ecuador is a relatively poor country with a national poverty ratio in 2015 measuring at 23.3% of the population living under the poverty line. In 2007, 36.7% of the population were living in poverty, by 2016 this number had decreased to 22.9% (World Bank, 2017). The poverty rate is affected by the unstable political, economical and unequal environment of Ecuador. Inequality in Ecuador it is caused by ethnical differences between white, mestizo, indigenous and Afro-Ecuadorian groups, the last ones? accounting for most cases of unequal treatment. The issue of inequality between the population is the hard access to education and health care by the communities. (Nopo, H. 2012). Crude oil export has been an essential part of Ecuador?s past and present economy, rapid decrease in international oil prices and earthquakes has weakened Ecuador?s economy, reducing its exports by half in 1987. ...read more.

The more significant inequality in the labour market has led to contraction of middle class and a widening gap between the higher and lower class (Larrea, C. Kawachi, I. 2004). The Ecuadorian government has aimed in the past and present to reduce poverty, inequality and increase economic growth. It has targeted to attract foreign investment into the country by establishing financial, regulatory and institutional reforms and creating a more transparent fair fiscal system. The government has increased its spending in health and education system using from oil exports (Weisbrot, 2017). The educational reform has helped population by increasing the number of schools and bilingual academic staff which has increased the number of children accessing education. Tax reform has also helped the publics spending and reduced inequality while reforms in health have led to a rise in health facilities and ease of access by individuals (Oxfam, 2013). According to Cevallos-Lopez, D, F. and Chi, C. (2010), there are still issues regarding the distribution of health care and education, individuals still being considered by their economic and ethnic status. ...read more.