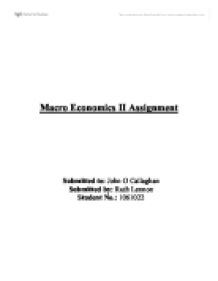 Present a report which outlines and evaluates the main contributions Friedrich Von Hayek (1889-1992) made to our understanding of macro economics.

Macro Economics II Assignment Submitted to: John O Callaghan Submitted by: Ruth Lennon Student No.: 1061022 Present a report which outlines and evaluates the main contributions Friedrich Von Hayek (1889-1992) made to our understanding of macro economics. The Austrian born economist Friedrich Von Hayek presented some of the most influential theories on markets in the 20th century. As a defender of the free market and of classical liberal principles he believed that we must move away from a state-controlled or "planned" economy and towards a society based upon freedom of association and exchange according to the rule of law. He is credited as being the "most prodigious classical liberal scholar of this century" and has been described as the central pioneering figure in changing the course of economic thought in the twentieth century." (Thomas Sowell, 1995). Hayek was born in 1899 in Vienna into a family of intellectuals. After serving in the army of World War I, he studied and received doctorates in law, psychology and economics from the University of Vienna (1921-1923). It was at this time that the theories of the Austrian School of Economics were being formulated and refined by Eugen Boehm, Friedrich Wieser and Ludwig von Mises, all of whom were second generation Austrian Economists. ...read more.

The book also attempted to develop a joint theory of investment and capital. However correct his assessment may have been, this book, Hayek's most technical, was his least influential. The book inexplicably failed to sell. At this time Keynes's brand on economics was on the rise. It appeared that in the eyes of the public Keynes had defeated Hayek and Hayek lost his standing in the profession. The "Pure Theory of Capital" proved to be Hayek's last substantial effort in the area of theoretical neoclassical economics. During this time Hayek was also involved in another grand debate sparked from Mises' denial that "a socialist economy could price its goods and services in accordance with the principles of relative scarcity." (Blaug, 1988, p88). This debate was known as the socialist calculation debate. Mises wrote, in his famous article "Economic Calculation in the socialist Commonwealth" (1920), that "pricing systems in socialist economies were necessarily deficient because if government owned the means of production, then no prices could be obtained for capital goods as they were merely internal transfers of goods in a socialist system and not objects of exchange, unlike final goods and thus they were unpriced and hence the system would be necessarily inefficient." ...read more.

He can be regarded as the key figure in the 20th century revival of liberalism. He played the lead role in the current tide change away from statism and back to liberalism which is regarded by many as a defining event of the 20th century. Hayek contributed greatly to our present day understanding of macroeconomics. He emphasised the importance of prices. He explained that the price system reflects the imbalance of demand and supply, and it automatically steers resources to where they are most needed without the need for planners to discover, understand, and correct the imbalance. He showed that competition was a dynamic process in which people are constantly searching to discover the cheapest mix of resources to produce the most desired output. Hayek highlighted the advantages of markets over planning. He demonstrated that the planned economy rests on the unlikely assumption that everyone can agree what to produce unlike the market exchange which works because people value things differently. It is around these basic principles that Hayek based his theories which have earned him the renowned respect as one of the most masterful economists of his time. Hayek's reputation has gone through a remarkable cycle as has the popularity of his work. He has provided the present day world with many foundations on which to build our understanding of economics, he truly was the political economist that economics had not seen since Adam Smith. ...read more.