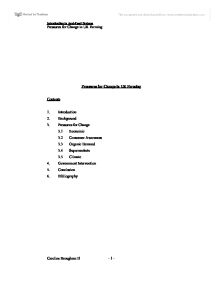 Pressures for Change in UK Farming.

Pressures for Change in UK Farming Contents 1. Introduction 2. Background 3. Pressures for Change 3.1 Economic 3.2 Consumer Awareness 3.3 Organic Demand 3.4 Supermarkets 3.5 Climate 4. Government Intervention 5. Conclusion 6. Bibliography Pressures for Change in UK Farming 1. Introduction Our task was to "consider underlying reasons for change and diversification in farming and the rural economy sector. Give particular attention to the identification of factors (pressures) brought about on the industry which have, are, and which are likely to be brought to bear upon agricultural business and the impact and consequences of such on the future for UK farming." Within this report I will be looking specifically at factors which have, will, and are currently having an impact on the agricultural industry and their resulting effects on agricultural business. The spider chart below (figure 1) illustrates the key pressures for change that any business in the rural economy sector must be aware of. Drivers for Change in Agriculture and the Food Industry 2. Background The Second World War brought the century long policy of non-intervention in farming in the UK to an end. The 1947 Agricultural Act introduced guaranteed prices for farm products, with deficiency payments funded by the taxpayer. With joining the European Community (EC), support for agriculture continued under the Common Agricultural Policy (CAP). The CAP was extremely successful in boosting European agricultural output. As a result, by the 1980's, large surpluses of the more common crops were produced throughout the European Community, which resulted in quotas and setaside regimes being introduced to control production. ...read more.

The main drawback to farmers is that there is a time delay as it takes three years for a farm to become fully organic. To aid farmers, in 1996 MAFF introduced the Organic Conservation Information Service. Another factor which is going to have a big impact on organic farming is the new regulation on organic livestock coming into action in 2005. At present organic cattle must be fed 75% organic matter to be considered organic, in 2005 all food matter for organic cattle much its self be organic. It is therefore likely to presume that the demand for organic animal feed stuff is going to increase. Consumer demand was not the only reason for a sudden increase in organic farming. Other factors also had a large part to play; poor prices for conventional food produce, wheat/ barley, livestock, where the same organic produce fetched much better premiums was a big incentive for farmers to move to organic farming. (figure 3) The Soil Association (2003) Low prices for conventional food produce comes around as a direct result of Supermarkets and other retail shops trying to keep food prices low. Supermarkets were quick to take advantage of the increase in demand for organic produce and started producing their own organic products. 3.4 Supermarkets; The supermarkets are selling products at lower prices for the convenience of consumers. To remain competitive the supermarkets and retail outlets are constantly lowering prices on commodity goods which as a result has a crippling effect on farmer's wages, which are decreasing rapidly. ...read more.

The CAP will always play a vital role in the agricultural sector of the EU and at current it is concentrating on the implementation of the Mid-Term Review, and the introduction of 10 new Member States to the EU agricultural system on 1st May 2004. 5. Conclusion UK farming has come through the crisis of Food and Mouth disease and many farmers have managed to survive and diversify due to changes in regulation. For farmers at the moment, and the whole agricultural industry in the UK, the main concern must be to regain the public trust in British produce. Many farmers saw the production of organic produce as a foot hold for future success in the UK farming. It is therefore clear to see that the success for the future will rely heavily on farming and food production in the UK being able to reconnect with the rest of the food chain and with consumers. Rules and Regulations set out in the CAP aim to help secure the success of future farming. Though it may seem sometimes to act as a constraint in some sectors of agriculture, is it devised in the long-term to improve farming conditions in all aspects of agriculture. It is vital for the success of any industry that it is aware of the latest developments relating to their sector and to be able to apply them. This is a weakness in UK farming. For the success of UK agriculture in the future, it must look at its past to see the changes that had to happen. It is vital that farmers realise that the pressures for change will constantly be there and for success they must continue to change. 6. ...read more.