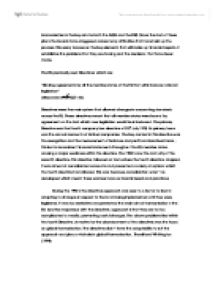 Harmonisation is the key aim for both the FASB and the IFRS. Since the start of these plans the boards have staggered across many difficulties that have held up the process. This essay focuses on the key elements that will make up financial reports, it establishes the problems that they are having and the decisions that have been made.

The EU previously used Directives which are:

Directives were the main system that allowed changes in accounting standards across the EU. These directives meant that all member states were bound by agreement on the fact which new legislation would be introduced. The primary Directive was the Fourth company law directive of 25th July 1978. Its primary focus was the annual accounts of Limited companies. The key context in this directive was the recognition and the measurement of balance and profit and loss sheet items, this led to inconsistent financial statements throughout the EU member states. causing a major weakness within the directive. The 1980’s saw the maturity of the seventh directive, this directive followed on from where the fourth directive stopped. It was aimed at consolidated accounts and prevented a variety of options which the fourth directive had allowed. This was because consolidation wasn’t as developed which meant there was less focus on local interests and practices.

During the 1990’s the directives approach was seen too be far to slow in adapting to changes in respect to them not being implemented until they were legislated. It was too restrictive and prevented the main aim of harmonisation n the EU. Another major issue with the directives approach is that they are far too complicated to modify, preventing useful changes. The above problems lied within the fourth Directive. A motive for the abandonment of the directives was the focus on global harmonisation. The directives didn’t have the adaptability to suit the approach and play a vital role in global Harmonisation, Thorell and Whittington (1994):

Another important factor which saw the decline of the Directives approach was that large European companies were focusing on US rules over EU. This led to the attraction and support of International accounting standards committee. In 2002 the EU adopted IAS as their primary standard. They required all EU listed companies to prepare consolidated accounts in line with IAS by 2005 with exceptions of companies listed in the EU and somewhere else currently using US GAAP. The IAS standards have the power to makes laws and regulations without having to pass legislation, resulting in companies being able to cross border trade with companies that possess reliable and comparable accounts

Following on from this, companies in the EU will had to report under IFRS by 2007. The rules mentioned above will applied to at least 7000 companies. In addition the SEC are also currently reviewing section 20F, which requires all EU listed companies to comply with these rules to be able to invest in the US stock market. The Accountancy magazine (2004) state that there aim is to drop reconciliation. This rule also means that there is no requirement to comply with Sarbanes Oxley.

Whilst attempting to converge frameworks, the IASB and the FASB have had many problems with developing the conceptual framework. There have been many disagreements that have consequently held the process back from developing. The areas of disagreement include the objectives of financial reporting, qualitative characteristics of accounting standards and measurement of items included in the financial reports.

A disagreement that has caused substantial confusion is the argument over the objectives of financial reporting? The FASB (2006) highlight the users of financial reporting and focus their aims on the primary user of financial reporting. The FASB (2006) evaluate the fact that a wide range of users should be identified. two important areas they discuss whether there is a need for a main user and information regarding the organisations resources. The first consideration was over who the main user should be to meet the objectives of Financial reporting, the FASB (2006) establish the need for the financial reports to meet the requirements for investors and creditors both potential and current. They also focus on accounting for a wide variety of users.  They relate their decisions, to the requirement to be able to make investment and credit decisions this maybe due to the SEC ( demanding that they exhibit info about investment decisions  . The IASB (2006: 33) explain

“As investors are providers of risk capital to the entity, the provision of

of other users that financial statements can satisfy.”

Another issue that causes conflicts is neutrality and conservatism. The FASB (2006) emphasise the fact that the two are incompatible, as conservatism is prudence. The financial reports should show some care and not anticipate profits. The FASB (2006: 56) states “describing prudence or conservatism as a desirable quality or response to uncertainty would conflict with the quality of neutrality.” Crook and Bullen (2005) discuss the trade off between reliability and relevance stating that although relevant information represents fair value and reliability focuses on historic cost. The conclusion was that even though historic cost is not as relevant it is more reliable therefore focuses strongly on reliability as a main factor.

Currently foreign companies intending to trade within the US market have to reconcile their accounts in order to assimilate with US GAAP. According to Turley (2007), the financial world is currently playing by different rules. This therefore causes confusion. The problems arise both within the US and with the investing foreign companies. The IFRS is currently used across Europe and is said to be expected to be present in over 150 countries within the next few year. The IFRS has previously been rejected by FASB due to various issues, the arguments also show me that there are other issues that could have lead to the rejection. Thornton (2007) discusses the issues being down to the fact that, IFRS are used by member states to adapt their own national GAAP. White (2007) states that the SEC, who govern FASB in making US GAAP, emphasise the importance of the IFRS staying consistent and faithful. This was a big reason for the FASB not accepting the IFRS. Nicolaisen (2004) also states the SEC can’t rely on the IASB to continue to be consistence in aiming to set the worlds standards. Additionally according to Nicolaisen (2004) countries were adopting IASB but not fully implemented them. An example of this would be IAS39. On the face of it the FASB don’t want to accept IFRS’s due to assurance, but it seems that the FASB may be envious and arrogant towards IFRS’s. Sir David tweedy stated that:

“ We listen to the world, FASB just listens to the US”

According to Accountancy Magazine (2004) US GAAP is the world’s number one regulator, and that if IFRS is to be accepted then that will be parallel to US GAAP. I don’t think that the US favoured this as IASB was half the US GAAP’S age. The SEC has recently changed its view and has decided that it is the time to drop reconciliation in respect to IFRS. This means that foreign investors will be able to trade in the US market using IFRS. The reason for this, was that the cost to reconcile accounts in accordance to FASB. Denis Durverne in White (2007) points out that the average cost for reconciliation is around $25million. This would deter foreign investors due to costs, this was the origin for the SEC changing its position. On top of this according to White (2007) US investors were losing investment opportunities which saw a decline in market price. Moving on Illiano and Thornton (2007) focus on the US understanding that costs will be incurred for training and guidance before IFRS can fully be implemented. Hertz in Turley (2007) suggests, that it is imperative that the boards can establish a target date so that organisations can start to make the vital adjustments to comply with IFRS, he also focuses on the fact that the acceptance will enable education to strive towards teaching the IFRS standards so that up and coming accountants are fully capable of applying IFRS.  With both boards on the road to success there is a lot of support for the introduction to IFRS it is essential for the acceptance, it would mean that we are one step closer to harmonisation. On the face of it, it seems that the adoption would create success all round, but if they adopt IFRS then they may lose interest in convergence and in the long run may mean that standards are of significant difference. So it seems that companies should be able to adopt either standard as long as the process of convergence is not forgotten. In addition the CFO (2007) notes that on the 16th of November the SEC have abandoned the need for reconciliation for foreign investors investing in the US market.

The current issues that surround the boards are of great importance. These issues need to be resolved as to get the best from financial reports. The FASB seem to dominate as for instance investors, creditors for main users and decision-usefulness as an objective. The objectives are an important issue as without these the boundaries of financial reporting cannot be set. The boards seem to be getting closer with the decision for financial reporting. The SEC’s current proposal to drop the reconciliation process has meant that the process can take one step further. Previous standards have shown that a lack of understanding and acceptance can prevent the process. The adoption of IAS and IFRS was a major breakthrough. There are still many rivers to cross in respect to completed convergence.

Qualitative Characteristics, and the Definitions of Understandability and Materiality” FASB journal

Lennard, A (2007) Accounting in Europe: Stewardship and the Objectives of Financial

On 25 October 2006, to promote debate on the issues, the Institute hosted a major forum on the discussion paper: The New Conceptual Framework: Objectives and Qualitative Characteristics.