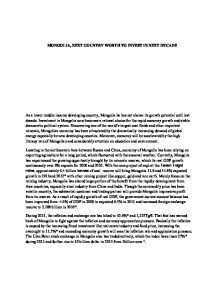 Prospects for Mongolian growth. With ample mineral reserves and increasing demand for resource globally, Mongolia will experience rapid economic growth in the next decades. The relative stable and democratic political system dramatically reduces the poli

MONGOLIA, NEXT COUNTRY WORTH TO INVEST IN NEXT DECADE As a lower middle income developing country, Mongolia ha has not shown its growth potential until last decade. Investment in Mongolia now becomes a rational choice for the rapid economy growth and stable democratic political system. Discovering one of the world's largest coal fields and other important minerals, Mongolian economy has been stimulated by the dramatically increasing demand of global energy especially be new developing counties. Moreover, economy will be accelerated by the high literacy rate of Mongolian and considerably attention on education and environment. Locating in the northeastern Asia between Russia and China, economy of Mongolia has been relying on exporting agriculture for a long period, which fluctuated with the seasonal weather. Currently, Mongolia has experienced the growing opportunity brought by its minerals reserve, which its real GDP growth continuously over 8% expects for 2009 and 2010. With the new project of exploit the Tavan Tolgoi mine, approximately 6.4 billion tonnes of coal reserve will bring Mongolia 11.9 and 14.8% expected growth in 2011and 2012* with other mining project like copper, gold and rare earth. ...read more.

To attract foreign investment, the stable and democratic political system makes great contribution to it. After abandoned the communism system 20 years ago, Mongolia have transformed into republic and election political system, which brought political freedom to Mongolian. Current co-organized government work well and keep relative peace and highly efficiency. Though facing election in 2012, both parties make the current economy development policy which ensuring the consistent of policy and the broke would not challenge foreign investors. Uncertainty may rise if the economy meets trouble, there will be protest of foreign investment and inflation. However, under the rapid economic growth period, there is positive view to support the stable political environment. In addition, Mongolian government have imposed the benefit share plan that monthly $15 and onetime cash $550 subsidy for every citizen^. The new coal field exploitation plan also give out the company's shares to citizens. The government spending guarantee that normal Mongolian can experience the prosperity and release the dissatisfaction about privation state-owned corporation and encourage foreign investment. ...read more.

For domestic "software" side, Mongolian' literacy has been kept to above 95% in past few years and government spent approximately 5.6% of GDP in education expense in 2009, which ranked 39th in the world+. The attention put on education by Mongolia government will benefit and accelerate economy when it change the mode from "export resource centre" to "manufacture centre "or "creating value centre". Considering the environment issue in Mongolia, government has taken action to shut down about 1500 small t mining companies with reasonable compensation, since their activity have lead to inefficient production and over-pollution. With ample mineral reserves and increasing demand for resource globally, Mongolia will experience rapid economic growth in the next decades. The relative stable and democratic political system dramatically reduces the political risk domestic, and the tightened relationship with neighbors also eliminates the risk of having foreign conflict. Moreover, the improving "software" in Mongolia guarantees the potential opportunity to gain economic growth in the future. In conclusion, Mongolia provides a great opportunity for foreign investors to generate profit with outweigh return than its risk. I have the confidence that investing in Mongolia will outperformance than investing in the domestic market in next decade. ?? ?? ?? ?? ...read more.