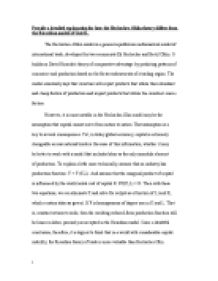 ﻿Provide a detailed explanation for how the Heckscher-Ohlin theory differs from the Ricardian model of Unit II. The Heckscher?Ohlin model is a general equilibrium mathematical model of international trade, developed by two economists Eli Heckscher and Bertil Ohlin. It builds on David Ricardo's theory of comparative advantage by predicting patterns of commerce and production based on the factor endowments of a trading region. The model essentially says that countries will export products that utilize their abundant and cheap factors of production and import products that utilize the countries' scarce factors. However, it is more notable in the Heckscher-Olin model may be the assumption that capital cannot move from nation to nation. ...read more.

Since a doubtful conclusion, therefore, it is logical to think that in a world with considerable capital mobility, the Ricardian theory of trade is more valuable than Heckscher-Olin. One might accept that tangible capital goes internationally to equalize the marginal product round the world but that human capital cannot move. Subsequently all, American can easily invest in Toyota stock but not in a college degree of a Japanese worker. In this case, one might conclude that the right distinction for Heckscher-Olin is not capital and labor but instead skilled and unskilled workers. Nevertheless, there is different way to consider about the problem. Suppose every family chooses how long to keep their kids in school. ...read more.

In conclusion, in the Ricardian model, labor gains from trade through an increase in its buying ability. This consequence does not support labor union requirements for limits on imports from less affluent countries. The Heckscher-Ohlin model straightaway addresses distribution by studying the effects of trade on the proprietors of elements of production. In the circumstance of this model, unskilled U.S. labor turns a loss from trade since this group represents the relatively scarce elements in this nation. The effects from the Heckscher-Ohlin model reinforcement labor union requirements for import limits. In the short run, certain unskilled unions may gain or lose from trade depending on in which sector they work, but in theory, in the longer run, the conclusions of the Heckscher-Ohlin model will dominate. Reference Paul R. Krugman, & Maurice Obstfeld, (2009). International Economics: theory & policy (8th). ...read more.