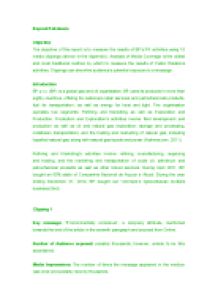 Public relations:The objective of this report is to measure the results of BP's PR activities using 10 media clippings

﻿Beyond Petroleum Objective The objective of this report is to measure the results of BP's PR activities using 10 media clippings (shown in the Appendix). Analysis of Media Coverage is the oldest and most traditional method by which to measure the results of Public Relations activities. Clippings can show the audience?s potential exposure to a message. Introduction BP p.l.c. (BP) is a global gas and oil organisation. BP uses its products in more than eighty countries, offering its customers retail services and petrochemicals products, fuel for transportation, as well as energy for heat and light. The organisation operates two segments: Refining and Marketing as well as Exploration and Production. Production and Exploration's activities involve field development and production as well as oil and natural gas exploration; storage and processing, midstream transportation; and the trading and marketing of natural gas, including liquefied natural gas, along with natural gas liquids and power (Nytimes.com, 2011). Refining and Marketing's activities involve refining, manufacturing, supplying and trading, and the marketing and transportation of crude oil, petroleum and petrochemical products as well as other linked services. During April 2011, BP bought an 83% stake of Companhia Nacional de Acucar e Alcool. During the year ending December 31, 2010, BP bought out Verenium's lignocellulosic biofuels business (Ibid). Clipping 1 Key message: ?Environmentally conscious?, a company attribute, mentioned towards the end of the article in the seventh paragraph and sourced from Online. ...read more.

Clipping 9 Key message: ?Lower emissions?, mentioned in the first paragraph, a product feature and sourced from Online. Number of Audience exposed: Thousands. Media Impressions: Not able to determine an exact or any specific number. Tone: Positive. Potential Audience: Thousands. Article Length: Just over 1 inch. Content: A report about Biofuels' reduction of emissions. - ethanol. Sector Analysis: The biofuels sector is a growing and increasingly competitive industry, with companies investing heavily in future fuel alternatives to reduce harmful emissions that stress the environment; ethanol is an example. Clipping 10 Key message: ?Energy efficient?, mentioned in the firs paragfraph of the report and sourced from Online. Number of Audience exposed: possibly thousands, however mentioned once on the BP website page. Media Impressions: Unable to determine. Tone: Positive. Potential Audience: Possibly thousands. Article Length: About 14 column-inches. Content: BP's alternative fuels and energy and fuel efficiency. Sector Analysis: Fuel efficiency is vital to be able to reduce costs for both BP and its customers as well as reduce the harm inflicted on the environment. Alternative fuels sector is growing rapidly due to the need to be more carbon neutral. Convlusion Largely, BP's PR image and media exposure is not very healthy due to the colossal environmental damage inflicted on the Gulf of Mexico a few years ago. The positive factors are more visible in their product attributes, but the company's attributes have taken a dent concerning to some operational, environmental and social issues, most recently, with the BP oil spill. ...read more.

(BP, 2006) Clipping 7 BP Superwash - Report ?BP superwash is environmentally friendly and waterwise - each site recycles up to 85% of water used. So forget the bucket and sponge, with over 60 BP superwash locations in Australia it?s never been easier to keep your car looking good and remain waterwise!? (BP.com, 2011) http://www.bp.com/sectiongenericarticle.docategoryId=9012412&contentId=7017052 Clipping 8 1. CSR Disasters: BP Spill, A Year On April 21, 2011, by Akhila Vijayaraghavan ?One of the biggest environmental disasters happened around this time last year. The BP oil spill has leftundeniable impressions on how we view oil drilling and non-renewable sources of energy. This has had a knock-on effect on CSR, PR and marketing. The BP spill is possibly the most high-profile CSR/PR disaster of recent times? (Justmeans.com, 2011). http://www.justmeans.com/CSR-Disasters-BP-Spill-A-Year-On/48568.html Clipping 9 BIOFUELS: A GROWING ALTERNATIVE ? BP REPORT 1. Advanced biofuels 2. ?Biofuels aren't new, but technology is being developed to create even better biofuels 3. with lower emissions and better performance ? (BP, 2011). http://www.bp.com/productlanding.do?categoryId=9030593&contentId=7055794 Clipping 10 ? BP Report Efficiency: What if saving a lot of energy didn't take a lot of your energy? ?Using energy more efficiently is an important goal for us all. Using less energy to do more: that's something we can all strive for. See the things you can do to become more energy efficient at BP Energy Lab. You'll take a fun interactive journey with Professor B to estimate your carbon footprint, uncover ways to cut your energy usage, and learn more about environmentally friendly energy? (BP.com, 2011). http://www.bp.com/iframe.do?categoryId=9030826&contentId=7056954 ...read more.