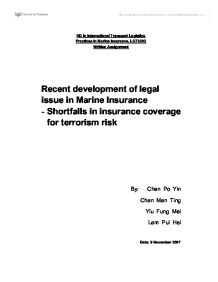 HD in International Transport Logistics Practices in Marine Insurance, LGT3502 Written Assignment Recent development of legal issue in Marine Insurance - Shortfalls in insurance coverage for terrorism risk By: Chan Po Yin Chan Man Ting Yiu Fung Mei Lam Pui Hei Date: 9 November 2007 1. Introduction In recent years, shipowners are facing the shortfalls in insurance coverage for terrorism. Under the Athens Convention for the passengerships, compulsory insurance is required to limit the liability for the shipowners. The Wreck Removal Convention also requires a compulsory insurance certification of terrorism risk. Shipowners are concerned that the insurance market may not be able to provide practicable and affordable cover for the demand of the above conventions. Recently, it is difficult for the broker of shipowner to find cover in the commercial insurance market, terrorism losses are always be unforeseeable so that the loss is great. In addition, the P&I clubs, where the shipowners place much reliance, do not underwrite terrorist risks. All this circumstances create the issue of the shortage in the terror cover. 2. Background There are 4 main causes for the shortfalls of terrorism coverage for shipowners. Athens Convention Athens Convention will require carriers to buy a compulsory insurance or other financial security not less than US$325, 000 per passenger on each distinct occasion. Ships are to be issued with a certificate attesting that insurance is in force. Under the convention, shipowners are forced to buy insurance otherwise the ships will not e permitted to trade without certification. ...read more.

Insurers then started to seek other programs to transfer their liability. The program that most of the insurers use nowadays is the reinsurance pool. Terrorism pool has been operated in different countries to cover insurance company losses from property, business interruption and third-party liability coverage up to a certain limit. Insurers pay premium at a rate set by the pool. So, shipowners who have insurable interest can purchase insurance with a terror cover from an insurer. Then the insurer can reinsure his liability in the reinsurance pool. This program limits the liability for the insurers so that they are willing to provide terror cover for the shipowners. Besides, some of the country, such as France and Spain, government will sponsor the reinsurance pool. The government will pays for all terrorist claims that exceed a specific amount. However, as the loss in marine terrorism is a huge amount. The reinsurance pool may not be sufficient for some kind of terrorism risk. The risk such as war, including nuclear and biological contamination which is caused by terrorists attacks may not be cover in most of the reinsurance pool. In addition, due to the high demand of terrorism coverage which required by the Athens Convention and the Wreck Removal Convention, shipowners are still concerning whether the marine insurance market will be able to supply practicable and affordable cover for the types of ships in the conventions. Deductible & Retention Under the Terrorism Risk Insurance Extension Act in USA, insurers would pay in the effect of a terrorist attack. ...read more.

The implementation of the Athens Convention in mid-2008, will require the shipowners to buy a compulsory insurance so as to obtain a 'blue card', otherwise the ship will not allow to trade. As a result, shipowners are concerning the shortfalls in the terrorism coverage might greatly affect their operation. As the losses claim of a marine terrorism insurance must be great, an estimated figure shows that the total loss of a cruise ship with all hands at US$3 billion. Shipowners must buy a terrorism coverage to limit their liabilities and to guarantee the security for the passengers and customers, so compulsory insurance of terrorism is necessary. Athens Convention is producing a solution to solve the shortfalls. Their formula is to separate a marine insurance policy into two parts, terrorism and non-terrorism, so that P&I clubs can cover part of the risk which is not cause by terrorism. However, there are problems for those companies covering the terrorism risk, as some of the risks are still uninsurable. It indicates that those insurance companies are still unwilling to provide terrorism coverage. In long term, the International Maritime Organization and the other Conventions should find another solution to solve the problem. We recommend the P&I clubs to establish an separated international mutual pool for the shipowners to join. The government should also help to maintain a peace and safety environment for the marine trade. If necessary, they could be a insurer for the terrorism coverage in the future. Then, the problem of the shortfalls in terrorism coverage could be solved. 8. ...read more.