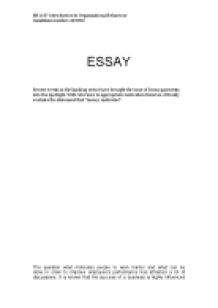 Recent events in the banking sector have brought the issue of bonus payments into the spotlight. With reference to appropriate motivation theories, critically evaluate the statement that money motivates.

﻿BH1107 Introduction to Organizational Behaviour Candidate number: 603090 ESSAY Recent events in the banking sector have brought the issue of bonus payments into the spotlight. With reference to appropriate motivation theories, critically evaluate the statement that ?money motivates?. The question what motivates people to work harder and what can be done in order to improve employee?s performance has attracted a lot of discussions. It is known that the success of a business is highly influenced by the professional capacity and motivation of businesses workforce. This is why managers seek for the answer to this question. Many of them are using pay-for-performance method to motivate people because they believe in its effectiveness (Abowd, J. 1990). People go to work everyday for money, so bigger salary equals better performance (French et al., 2005). But recent studies and researches showed that motivation is a complex psychological process that is subject to both internal and external influences (Matsubara, 2007). This is why a lot of theories have been introduced in order to explain those factors. Maslow?s Hierarchy of Needs theory, Herzberg?s Two-Factor Theory, Victor Vrooms expectancy theories are all widely known motivation theories and will be discussed in this essay in order to critically evaluate the statement that ?money motivates?. Financial incentives are extrinsic rewards that come from outside an individual. The motivating factors are rewards such as hourly wage increases or bonus payments. They are tangible visible to others and contingent on performance. ...read more.

There was an investigation carried out by Development Dimensions International, and published in the UK Times in 2004. It was based on a panel composed of 1,000 staff from companies employing more than 500 workers. It revealed that many employees were thinking about another job mainly because of boredom and lack of commitment while only a few stated that pay was the reason for thinking about leaving their jobs. This data proves the idea of money being a hygiene factor rather than motivator because the main reasons provided by workers were lack of motivating and challenging tasks and no opportunities for advancement - classic Herzberg motivators. Also, findings of a more recent survey, carried out by National Training Awards (2010), revealed that 76% of employees chose their jobs because of the salary, but only 32% of them maintained to be motivated by pay to perform well in their job. These surveys supports views of Herzberg that money is only a hygiene factor and does not contribute to increased motivation. Both of the motivation theories discussed before were content theories. Those theories mostly emphasize the ?what? aspect on motivation while process theories analyses the ?why? and ?how? aspects (French et al., 2005). In order to understand what motivates people a further investigation has to be made about the reasons why people choose to work harder and how they decide to choose one action over another. Victor Vroom?s expectancy theory is one of the well-known process theories that can be applied to pay and motivation. ...read more.

The success of financial incentives also depends on employee?s ethnical and cultural backgrounds. The wealth of possible motivations for humans is massive and it might indicate that each culture selects for emphasis only a certain motives that can activate its people. ?Thus, in a sense, culture rather than human nature determines a man?s motives and drives? (Al-Issa, 1970, p. 98). It means that introduction of bonus payments in one culture might prove as successful motivator while in other culture it would not affect job performance at all (French et al., 2005). That is why assuming that people are motivated by the same things in every culture is wrong and should be avoided (Hofstede, 1993). ?So talking about money motives ? one culture would hardly recognize monetary values while another has made them fundamental in every field of behavior? (Al-Issa, 1970, p. 103). In conclusion, it can be said that every human is an individual and is motivated differently and that reflects different motivation theories. Maslow?s hierarchy of needs theory states that money satisfies lower order needs and might contribute to higher order self-esteem needs. Herzberg?s two-factor theory concluded that money does not contribute to improved performance and is only a hygiene factor. Vroom?s expectancy theory supports the idea of motivating people through financial incentives as long as the people have desires for them. But in general we could agree that money does motivate. People will always need more money. As a famous German American oil magnate John D. Rockefeller once was asked: ?How much money is enough?? Rockefeller replied: ?Just a little bit more!? Word count: 1886. ...read more.