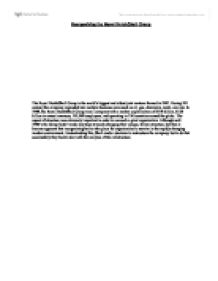 Reorganizing the Royal Dutch/Shell Group The Royal Dutch/Shell Group is the world's biggest and oldest joint venture formed in 1907. During XX century the company expanded into multiple business areas such as oil, gas, chemicals, metal, coal etc. In 1998, the Royal Dutch/Shell Group was a company with a market capitalization of $178 billion, $128 billion in annual revenues, 101,000 employees, and operating in 130 countries around the globe. The aspect of structure was extremely important in order to run such a giant organization. Although until 1990's the Group hadn't made any steps towards changing their unique, formal structure, but then it became apparent that reorganizing has to take place for organization to survive in the rapidly changing modern environment. Understanding this, Shell made a decision to restructure the company, but to do that successfully they had to start with the analysis of the old structure. The problems of the old structure From analysis of the pre-1995 structure of Shell Group, it is possible to identify a number of problems. One of the problems was large corporate bureaucracy. Bureaucracy in its ideal form is characterized by a hierarchical authority structure, specialist functions, strict separation of work from non-work activities, and control by written rules. The main features of bureaucracy are specialization through a "systematic division of labor" with clear job definitions and individual authority limited to the sphere of work responsibilities, and each lower office is under the control and supervision of a higher office. This results in the slow-down of the process of decision making as no decision can be made without confirming it with the higher levels and therefore it takes a long time for information to travel through multiple layers of the organization, and it is getting even more complicated because most of communication has to be done in the written form. This leads to a common thought that bureaucracy is a serious threat to efficiency. ...read more.

Could act fast as to realize the ambitions within the time horizon of less then one year. (dynamic markets) Although the Shell group had an emphasis on simplicity, accountability, and clear lines of authority, compared with its leading competitors Shell's structure remained complex. Thus, no matter how much restructuring the group undergoes the coordination will be hard to improve. However, Shell being such a large multinational organisation can actually gain from its complex structure. In the way that can enable the Shell Group employees to share the functional expertise, product related knowledge and side specific know how between the organisational divisions as well as sharing certain activities. Not only can this reduce costs of production and research, but also improve general performance, as well as create a long term competitive advantage. How feasible it is to implement change to the organization's North American operations? We will first discuss the major issues that need to be considered here and then we will analyze them to make a reasonable conclusion. The first point here is that the two parent companies that is Royal Dutch petroleum company and the Shell transport company, each have their shares separately listed on the stock exchanges of Europe and USA and have separate board of directors. So USA operations are not managed by the parent company in the UK. Also according to the shell's three-way matrix, geographical dimension has been the most important consideration and most of the strategic planning was at national or regional levels. Planning at shell was almost bottom up meaning that operating companies in each country had their own strategic plans and the role of the planning staff and regional coordinators was just to coordinate these plans. Therefore these factors definitely indicate that any sort of change that needs to be initiated must be originated by the operating companies themselves due to the bottom up process and too much decentralization at Shell and therefore any change from the top management will be difficult to administer or implement. ...read more.

This is something that has lacked in Shell for a very long time. Every organization needs leadership, and these needs are mentioned below: 1. Building confidence 2. Building enthusiasm 3. Cooperation 4. Delivering results 5. Forming networks 6. Positively influencing others 7. Using information efficiently and distributing this information effectively As discussed, this new structure organizes the company into five operating companies independently, although they draw on a common network of service companies and comply with the same set of principles. With this Shell realized the need to enhance internal as well as external business processes by digitizing all major businesses. This would allow Shell to greatly cut down on paper work and staff, thus reducing cost by a substantial amount. It would allow the company to improve communication with governments and partners world wide. This measure has been undertaken with the help of IBM with a view to make this organizational structure sustainable and competitive in the future. This part of the report has been concentrated on the few things that need to be changed in this new structure to allow Shell to be capable of adapting to the new environment. As new developments take place, for example, the greater emphasis on Russian Oil fields, pioneered by BP and the reducing reliance on OPEC, it would be important for decision making to be quick, decisive and for the responsibility to be limited to the top level. Individual leadership would mean a major change in the cultural and working environment of the company but would surely benefit them in the long run. As of present, even though this new structure is much more flexible and adaptable than the matrix of the 1970's, 80's and early 90's the need for a separate corporate center to facilitate the CMD is in our view inconsequential. By installing a single CEO, Shell would not only be able to drastically cut down on the corporate expenses but also allow for greater reporting directness. This would allow for further decentralization and independence of operating units. ...read more.