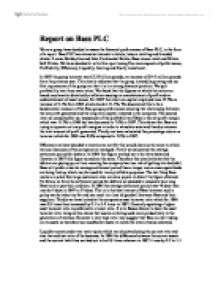 Report on Bass PLC We as a group have decided to assess the financial performance of Bass PLC, in the form of a report. Bass PLC has extensive interests in hotels, leisure retailing and branded drinks. It owns Holiday Inn and Inter-Continental Hotels, Bass leisure retail and Britvic Soft Drinks. We have decided to write this report using five main aspects of performance, Profitability, Efficiency, Liquidity, Gearing and finally investment. In 1997 the group turnover was �5.25 billion pounds, an increase of �145 million pounds from the previous year. This clearly indicates that the group is steadily growing and our first impressions of the group are that it is in a strong financial position. We split profitability into three main ratios. We found that the figures on which the ratios are based may have be distorted by inflation causing an overstatement of profit and an understatement of asset values. For 1997 the return on capital employed was 15.7% an increase of 1.4% from 1996 which stood at 14.3%. We discovered this to be a fundamental measure of the Bass groups performance showing the relationship between the net profit generated and the long term capital invested in the company. ...read more.

However a very high ratio may suggest that Bass is over trading on its assets an therefore has insufficient assets to match the level of sales achieved. Liquidity comes under two main topics which we calculated using the current ratio and also the acid test ratio of the business. In 1996 the difference between the current assets and the current liabilities worked out to be 0.9 times whereas in 1997 it rose by 0.2 to 1.1 times. Therefore these ratios show clear problems with liquidity. In some texts the notion of an ideal current ratio is usually two to one. However we found that different types of business require different current ratios. In 1996 they did not have enough money to pay there creditors. This is shown on the balance sheet as the current assets is less than the creditors. The net current assets are therefore shown as liabilities. In 1997 the situation is reversed and the company did have enough money to pay it's creditors. This is also shown on the balance sheet as the current assets are more than the amount of money that they owe. Secondly we calculated the acid test ratio as we felt that this ratio represented a more stringent test of liquidity. ...read more.

Relating the points we have covered previously we have found that ratios can be used to analyse various aspects of the position and the performance of a business. Although, we found that if the information published is not as reviling as required, it is very hard to calculate certain ratios. Ratios are useful as they can highlight certain strengths and weaknesses of the company but they fail to identify the underlying causes. Bass PLC on the whole is a strong and profitable company but as all companies do we found it to have some weaknesses as stated in the report. Although these ratios give a good indication of performance , we found that looking at many of the figures and comparing them to the previous year give us equally as good an impression in the same areas. We have also concluded that no company is one hundred percent efficient no matter how good the management is. Basses bank account has risen from 72 million in 1996 to 143 million in 1997, this was mainly due to an increase in major disposals. Well it can be seen Bass PLC is in a strong financial position and look set to continue efficiently well into the next millennium. ...read more.