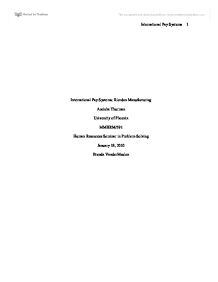 Robert Lord is a Director of Plant Operations for Riordan Manufacturing, he is also the expatriate who will be sent to oversee the production plant in Japan. Through the experience of expatriate Robert Lord, this paper will assess the role of social cont

International Pay Systems: Riordan Manufacturing Aneisha Thurman University of Phoenix MMHRM/591 Human Resources Seminar in Problem-Solving January 18, 2010 Brenda VanderMeulen Intro Riordan Manufacturing is an industry leader in plastic molding with three plants in the United States and one in China. Riordan is now considering an expansion into Japan. Robert Lord is a Director of Plant Operations for Riordan Manufacturing, he is also the expatriate who will be sent to oversee the production plant in Japan. Through the experience of expatriate Robert Lord, this paper will assess the role of social contract on international compensation systems, evaluate the equity in compensation within the same country, evaluate the effect of trade unions and employee involvement in compensation systems for cross border organizations, compare, and contrast pay systems across countries. Role of the Social Contract in Japan Social contract refers to an agreement between the governed and the government defining and limiting the rights and duties of both parties. The social contract in Japan dictates government involvement business practices, operations, and expectations for employees. The social contract in Japan main objective is to provide protective measures to ensure consistency throughout its society. ...read more.

The "going-rate" approach involves variation of pay because of assignments in multiple locations. This approach is evident when an employee is transferred from an economically advanced location to a developing country. Compensation plays a significant role in international strategies. There are various approaches that can be utilized to ensure compensation is sufficient for both home nationals and expatriates. The effect of Trade Union and Employee involvement in Compensation systems for Cross Border Organizations Employee Involvement (EI) has a tremendous effect on compensation systems as do trade unions. Employees input are integral in determining their type of compensation. The way in which employees are compensated effects the overall performance of an organization, it affects morale, and it ultimately effects the growth of the organization. If employees are compensated "fairly" productivity will suffer and no company will grow and prosper with unhappy, underpaid employees. When employees are involved in compensation decisions it gives them a sense of value. Trade unions also play a dominant role in determining the level of wages as well as working conditions. The way in which trade unions determine compensation has the potential to affect their membership levels and their power. ...read more.

Salary in Japan is often about 85% of the total compensation package. Additional benefits in Japan typically include pension contributions, health compensation, and child-bearing allowance insurance. In addition, Japanese companies also provide subsidized private housing or family allowances. Ultimately, Robert Lord's pay as an expatriate would be higher than that of a Japanese national, not only because his compensation package will include other benefits, but also because his base salary would also be higher. If he were to return to the U.S. his pay would decrease because the cost of living is less expensive and certain incentives and allowances will no longer be necessary. Conclusion U.S corporations looking to expand internationally must take into consideration many issues in respects to culture, local conditions, expatriate compensation, etc. Riordan Manufacturing has to ensure that they do their homework in respects to understanding the Japanese culture, customs, and systems. It will be imperative for Riordan to ensure their global strategies and compensation practices are in tuned or complementary to Japan's systems. It is even more important for Robert Lord and other expatriates to understand the uncertainty of taking assignments abroad. Expatriates must also have a thorough understanding of the international pay systems and how they will affect their quality of life. ...read more.