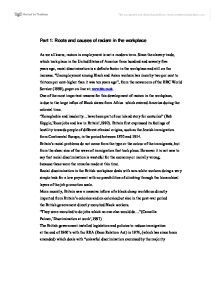 Roots and causes of racism in the workplace

Part 1: Roots and causes of racism in the workplace As we all know, racism in employment is not a modern term. Since the slavery trade, which took place in the United States of America three hundred and seventy five years ago, racial discrimination is a definite factor in the workplace and still on the increase. "Unemployment among Black and Asian workers has risen by two per cent to thirteen per cent-higher than it was ten years ago", from the newsroom of the BBC World Service (1999), paper on line at: www.bbc.co.uk. One of the most important reasons for this development of racism in the workplace, is due to the large influx of Black slaves from Africa which entered America during the colonial time. "Xenophobia and insularity...have been part of our island story for centuries" (Bob Hepple,`Race jobs and law in Britain',1992). Britain first expressed its feelings of hostility towards people of different ethnical origins, such as the Jewish immigration from Continental Europe, in the period between 1870 and 1914. Britain's racial problems do not come from the type or the colour of the immigrants, but from the shear size of the wave of immigration that took place. However it is not new to say that racial discrimination is wasteful for the economy or morally wrong, because these were the remarks made at this time. ...read more.

The definition of Indirect discrimination, as stated in the Race Relations Act 1976 , states that Indirect discrimination occurs where a person applies to a person of one racial group : ' ... a requirement or condition which he applies or would apply equally to persons not of the same racial group as that other but - (i) which is such that the proportion of persons of the same racial group as the other who can comply with it is considerably smaller than the proportion of persons not of that racial group who can comply with it; and (ii) which he cannot show to be justifiable irrespective of the colour race nationality or ethnic or national origins of the person to whom it is applied; and (iii) which is to the detriment of that other because he cannot comply with it; ' (s1(1)(b)) , (C. Palmer "Discrimination at work" 1992,LAG). As you can see the definition is complex and has often been wrongly been applied by tribunals and courts due to a lack of understanding. There are a number of questions, which need to be answered in order to prove indirect discrimination within the workplace . A good example of a job requirement that would be indirectly discriminate is the specification for no "headgear" , as this would exclude Sikh men and boys , ...read more.

"In terms of production recent racist incidents have prompted expensive walkouts by workers and may well be hindering output on a daily basis." said Mr Jandu. (www.bbc.co.uk/news ) In response to the crisis Ford management along with trade unions and the Commission for Racial Equality(CRE) agreed an action plan to stamp out racism at Dagenham, Essex. Agreed plan The action plan agreed in October last year had included: * Appointing a diversity manager responsible for diversity issues * Establishing a joint national equality opportunities and diversity committee at national level and at each plant * Establishing a small joint steering group to develop further details of the equality committees which will report back within 90 days. * Diversity managers are responsible for monitoring the recruitment, training, career development and promotion of ethnic minorities. * They have the authority to take any concerns over racism to senior management. (www.bbc.co,uk Thursday, 5 October, 2000, 07:12 GMT 08:12 UK) In April 2000, Ford announced it was to end car production at Dagenham, putting 3,000 jobs at risk and has since closed. It is fair to say that the problems experienced by Ford are a good lesson to all employers to observe how racism can manifest itself within the workplace and some of the initiatives that can be employed to counter this problem. ...read more.