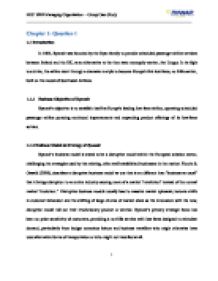 Chapter 1: Question 1 1.1 Introduction In 1985, Ryanair was founded by the Ryan family to provide scheduled passenger airline services between Ireland and the UK, as an alternative to the then state monopoly carrier, Aer Lingus. In its fight to survive, the airline went through a dramatic re-style to become Europe's first low fares, no frills carrier, built on the model of Southwest Airlines. 1.1.1 Business Objective of Ryanair Ryanair's objective is to establish itself as Europe's leading low fares airline, operating scheduled passenger airline pursuing continued improvements and expanding product offerings of its low-fares service. 1.1.2 Business Model & Strategy of Ryanair Ryanair's business model is stated to be a disruptive model within the European aviation sector, challenging the strategies used by the existing, often well-established businesses in the market. Flouris & Oswald (2006), describes a disruptive business model as one that is so different than "business as usual" that it brings disruption to an entire industry causing more of a market "revolution" instead of the normal market "evolution." Disruptive business models usually lead to massive market upheaval, tectonic shifts in customer behaviour and the shifting of large chunks of market share as the innovators with the new, disruptive model roll out their revolutionary product or service. Ryanair's primary strategic focus has been on price sensitivity of customers, providing a no frills service with low fares designed to stimulate demand, particularly from budget conscious leisure and business travellers who might otherwise have used alternative forms of transportation or who might not travelled at all. 1.2 Environment Analysis 1.2.1 Government Regulation According to (All� and Schmitz, 2004) EU deregulation has removed barriers to entry for airlines based in the EU. As a result airlines can operate anywhere within the E.U. without restriction. An area that has received much publicity lately is the subject of State Aid to airlines operating in secondary/regional airports. ...read more.

Responding or Adapting to Change Thompson et al (2008) also stated that, "a company's strategy evolves over time as a result of changing circumstances and ongoing management efforts to improve the strategy. This condition makes the task of crafting a strategy 'a work in progress', not a one-time event". Since there are a number of airlines competing with each other, over the years Ryanair has modified its business model/strategy on several occasions to add offerings that are unique to allow them stand out of the competition. v) Creating Ancillary Income Sources It has introduced new product offerings on its flights to create more differentiation, for example the creation of ancillary income sources. Cavendish (2006) underscores how Ryanair makes profit outside its main source of income of flying airplanes. Activities at Ryanair's website include sale of life assurance, travel insurance, online gaming and advertising & marketing to generate additional revenues and also create closer relationship with the over 15 million customers that visit the website every month (Air Scoop, 2007). Ancillary revenues alone generated more than �110.5m in 2003 and �149.6m in 2004. In 2007 more than 42 million passengers contributed to ancillary revenue in excess of �362m, and that works-out to �8.50 per passenger carried by Ryanair, (ARAC, 2008). This ability of Ryanair to quickly adapt to change has kept its basic model still attractive, viable and profitable. vi) Ability to Establish Model as Money-Maker and also Adopting a fluid Flat inexpensive Structure Thompson et al (2008), elucidate that a "company's business model explains the rationale for why its business approach and strategy will be a money maker. In the absence of the ability to deliver good profitability, the strategy is not viable and the survival of the business is in doubt". This situation is the reverse of the Ryanair experience, as it has shown the ability to continue to use its business model to deliver good profitability over the years. ...read more.

People work very hard and get a lot out of it". Certainly his vision has turned into a reality as Ryanair has grown and the 'public's insatiable appetite for bargain fares has continued to deliver record profits at Europe's biggest no frills airline", Davey (2006). 3.4 Finding Expression for O'Leary's Leadership Style O'Leary leadership style at Ryanair does not easily find expression in the characteristic criteria that Finlay (2000) described for a leader. His style does not fit rigidly into a particular criterion. The diagram below, adapted from Cook et al (1977) shows the types of leadership styles that Finlay (2000) believes to be the more dominant ones. One would place O'Leary in the 'Enrolling' criteria - i.e. High Task and High People orientations. TASK RELATED ORIENTATION PEOPLE RELATED ORIENTATION LOW HIGH LOW Laissez faire Autocratic HIGH Human Relations Enrolling O'Leary is highly task orientated, concentrating on tasks such as cost cutting, aircraft acquisition and route development. He is also (arguably) highly people orientated, both with customers and staff. O'Leary easily gets people involved and empowers them to create strategic changes; from cost cutting issues, punctuality to many others. At the same time however, because of his obsession with the task, he is poor in handling these same people and can be very abrasive and aggravate everyone, including even industry officials, customers and the media. 3.5 Conclusion and Recommendations Ryanair should be wary of the fact that their CEO does not seem to enjoy smooth sailing situations and rather thrives well on adversity. Whilst some school of thought would value O'Leary's relentless energy to thrive on adversity, Finkelstein et al (2009) however points this out as a danger signal. He concludes that O'Leary's capacity to irritate may bring about conflict and change that could dearly cost Ryanair. Since Ryanair is no longer in the era of adversity and has matured successfully from a market revolutionary transition, (which was effectively led by them), it is time to change for a 'manager' (Finkelstein, et al 2009), to consolidate their gains and position in the industry, (O'Higgins, 2004). (Total Word Count: 4019 words) 4. ...read more.