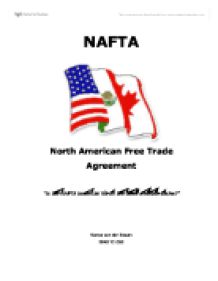 s the nafta beneficial for all parties?

NAFTA North American Free Trade Agreement "Is the NAFTA beneficial for all the three member states?" Bianca van der Zwaan IBMS Y2 GBE Table of content Introduction 1. NAFTA P4 2. Canada P6 3. United States P9 4. Mexico P11 5. conclusion P13 notes P15 Introduction The North American Free Trade Agreement, known as NAFTA, is an agreement between the United States, Canada and Mexico. The agreement was signed in 1992 and came in to force on January 1st 1994. After signing the agreement trade barriers between the members began to disappear, especially on goods as textile, computers, agriculture and vehicles. NAFTA became the biggest trade block in the world, with the highest GDP�. From the beginning the NAFTA agreement was very controversial. For example, the New York Times (7/21/92) said NAFTA promised "jobs, wealth and economic activity throughout the continent." While Presidential candidate Ross Perot warned that a "giant sucking sound" would be heard when jobs were lost in the United States and transferred to Mexico, as U.S. producers abandoned their domestic production facilities�. The above stated contradiction is just one example of almost 800.000 hits that I have found on the internet. I am wondering who is right? Is NAFTA the cause or the solution for the economic problems in Mexico, Canada and the States? I want to know if NAFTA is beneficial for al three member states? I will base this research of 3 major factors; import/ export, employment, GDP and poverty/wealth, while these are not all the factors where critics and promoters argue about. 1. NAFTA On the 1st of January 1994 the free trade agreement between United States, Canada and Mexico came into force. ...read more.

Although the import and export showed an immense growth the consequences for the citizens are miserable. The GDP per capita only has grown 1% in 10 years and still more than half of all Mexicans are living under the poverty line. The farmers have a hopeless fight against the cheap agricultural products of the U.S., which already have cost 1,5 million jobs. Instead of being a farmer they could work in the maquiladoras, which have poor work circumstances, like low wages and weak- or non- existence of labor and environmental law. Again, I think the situation wouldn't be very different without the NAFTA. Like I explained before, the increase in export and import will still exist, probably it would have developed slower, but it will be there. Also in Mexico, only the large MNE's and the companies related to trade will become richer. So my overall conclusion is that NAFTA above all is beneficial for the already rich MNE's, and they will become richer because of this agreement. NAFTA makes it easy to trade within the trade block. But without the NAFTA the same problems will occur, only the development of it would have been slower. Notes 1. CIA world factbook 2. www.clev17.com/~econstra//images/ESI_Research_Reports_PDF/nafta_the_economic_consequences_for_mexico_and_the_united_states.pdf) 3. www.citizen.org/trade/nafta 4. http://web.worldbank.org/WBSITE/EXTERNAL/COUNTRIES/LACEXT/MEXICOEXTN/0,,contentMDK:20233967~pagePK:141137~piPK:141127~theSitePK:338397,00.html 5. https://www.cia.gov/cia//publications/factbook/geos/ca.html 6. http://www.citizen.org/documents/NAFTA_10_jobs.pdf 7. http://www.canadianeconomy.gc.ca/english/economy/1994NAFTA.html 8. http://dsp-psd.pwgsc.gc.ca/Collection-R/LoPBdP/BP/prb0223-e.htm#wherefromtxt 9. http://www.economywatch.com/world_economy/canada/structure-of-economy.html 10. http://www.betterchoice.ca/en/nafta.htm 11. Chris Hawley, Arizona republic, http://www.azcentral.com/arizonarepublic/news/articles/0503canada03.html 12. http://www.tradeport.org/countries/canada/01grw.html 13. http://www.dfait-maeci.gc.ca/nafta-alena/over-en.asp 14. http://www.evd.nl/info/publicaties/printing_overzichten/lob_buh.asp?Landen=can&rubrieken=(alleen%20buh)%20en%20(exp,imp,sta)&sorteercode=niet%20leeg&iaantal=50&sortering=sorteercode 15. http://www.tcm-mec.gc.ca/mexico/agri-en.asp 16. Jeff Faux, Economic Policy Institute, http://www.epi.org/content.cfm/briefingpapers_nafta01_index 17. http://en.wikipedia.org/wiki/Economy_of_Mexico#NAFTA 18. About the Author: Joseph E. Stiglitz, professor of economics at Columbia University and author of "The Roaring 90's," was chief economist of the World Bank from 1997 to 2000. He won the Nobel Prize in economics in 2001, http://www.globalpolicy.org/globaliz/econ/2004/0106stiglitznafta.htm 19. Monica Campbell and Tyche Hendricks, Chronicle Foreign Service and Chronicle Staff Writer, http://www.bilaterals.org/article.php3?id_article=5715 20. http://www.twinplantnews.com/whatIs.htm 21. http://www.corpwatch.org/article.php?id=643 22. http://fpc.state.gov/documents/organization/34486.pdf ?? ?? ?? ?? 4 ...read more.